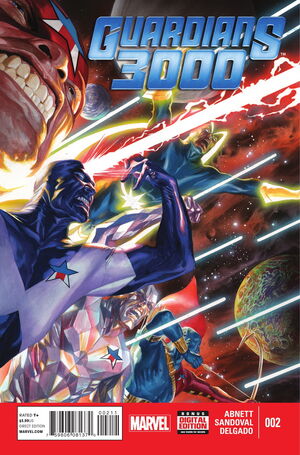 Appearing in "My Aim Is True"Edit

• The Guardians and their reluctant cosmic allies find themselves caught in a deathtrap ambush... but who is out for their blood? And with time collapsing, do they stand a hope of surviving?

• Guest-starring Gladiator of the Shi’Ar, the “original” Star-Lord, and an all-new Herald of.... you know who!

Retrieved from "https://heykidscomics.fandom.com/wiki/Guardians_3000_Vol_1_2?oldid=1431992"
Community content is available under CC-BY-SA unless otherwise noted.