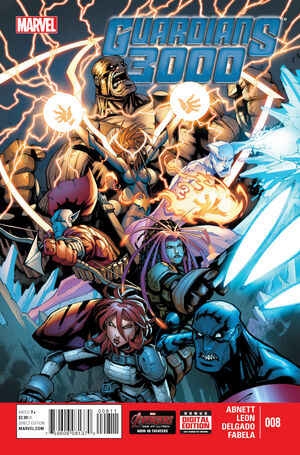 Appearing in "World Enough and Time"Edit

• Stranded on 21st century Earth, the 31st century Guardians finally have a chance to locate the anomaly that is ripping the past, present and future of the Universal Time-stream apart.

• But locating it is one thing…preventing it is something else altogether. Shocking twists and end-of-the-World action!

Retrieved from "https://heykidscomics.fandom.com/wiki/Guardians_3000_Vol_1_8?oldid=1730924"
Community content is available under CC-BY-SA unless otherwise noted.