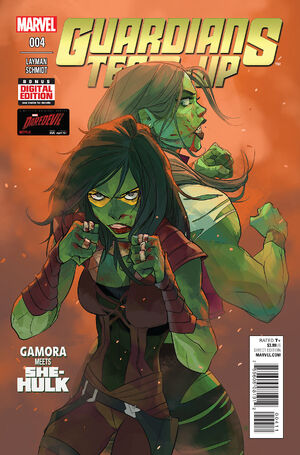 • ”She's tough, she’s green, she’s in New York – and I want her DEAD!” That’s what the intergalactic bounty hunters were told when they took the assignment. Only it turns out there’s TWO people in New York who fit that exact description. Wanna find out what happens when you get BOTH of them mad?

• Well, then read Guardians of the Galaxy Team-up #4!

Retrieved from "https://heykidscomics.fandom.com/wiki/Guardians_Team-Up_Vol_1_4?oldid=1647343"
Community content is available under CC-BY-SA unless otherwise noted.