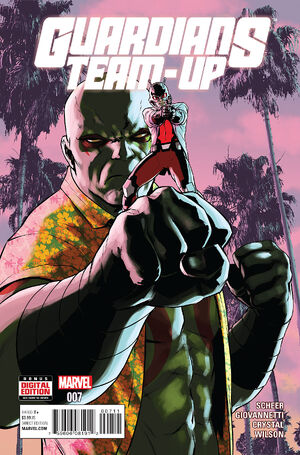 • DRAX is taking his talents to South Beach, the home of pastel suits, chainsaws*, and ANT-MAN.

• When a murderous alien ends up in Miami, it’s up to an unlikely duo of Ant-Man and Drax to stop him, that is of course if they can stop bickering with each other long enough. They’re Lethal Weapons who are Running Scared and they have 48 Hours to save the day before the Hot Fuzz come and replace them with The Other Guys.

•*Oh yes there will be chainsaws!

Retrieved from "https://heykidscomics.fandom.com/wiki/Guardians_Team-Up_Vol_1_7?oldid=1730910"
Community content is available under CC-BY-SA unless otherwise noted.