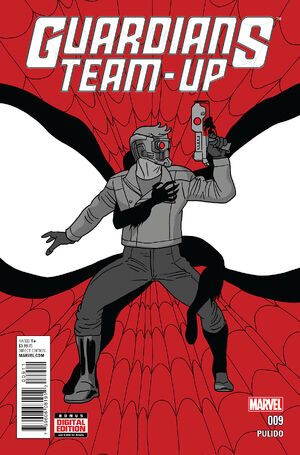 • Far, far away, one of the most dangerous weapons in the Galaxy has been stolen... by Spider-Man?!

• Peter Quill is back on Earth, his mission: recover the weapon and bring the web-slinger responsible for its disappearance to justice!

Retrieved from "https://heykidscomics.fandom.com/wiki/Guardians_Team-Up_Vol_1_9?oldid=1730701"
Community content is available under CC-BY-SA unless otherwise noted.