Start a Wiki
Part of the 'Guardians of the Galaxy & X-Men: Black Vortex' event 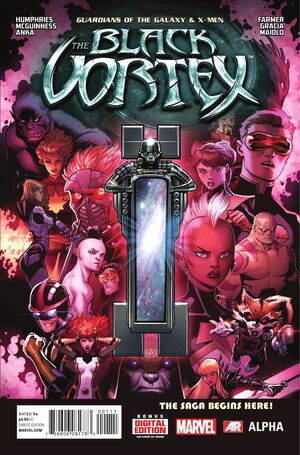 Twelve billions years ago, on the planet Viscardi, the indigenous Viscardi launch their ninth rocket to explore the stars, only for it to explode just before it passes the head of the resident Celestial, nicknamed Godhead. A lonely Viscardi, Gara, laments her people's lack of progress after advancing from caves quickly in four generations. She calls out to the silent Celestial, demanding the acknowledgement he hadn't given her people since the beginning. The Celestial responds and conjures up a mirror, the Black Vortex, in which Gara sees a reflection of herself empowered by the cosmos.

In the present, at the Jean Grey School, Storm scolds Beast for bringing the original X-Men from the past. Beast attempts to explain the complexities of the space-time continuum, when the All-New X-Men, Magik and X-23 teleport in to announce they're all going into space to find Kitty Pryde. Before the two teachers can ask questions, Magik quickly teleports all of them.

On the Guardians of the Galaxy ship, Star-Lord interrupts game night to tell them of how he and Kitty infiltrated Mister Knife's Flying Fortress (though he omits that they snuck in through the laundry and bound and stripped the two Skrulls workers attending to the laundry). Using Kitty's phasing powers, they manage to get into Knife's sanctum, where he was in the midst of negotiations with Thane and showing off the Black Vortex. Though Thane isn't impressed by the object, Knife demonstrates its powers by having the last living Blood Brother submit to the Black Vortex, granting him cosmic powers. He then adds Brother Blood to the newly re-christened Slaughter Lords. He makes an appealing offer to Thane, promising protection for both him and his followers and the power to defeat Thanos in exchange for one job. But just as Thane accepts his offer, Star-Lord and Kitty steal the Black Vortex. Knife howls in rage before Misa announces that she knows where to find them.

Star-Lord gathers everyone, both Guardians and X-Men, to show them the Black Vortex and howlers to get their attention once pleasantries are exchanged. Just as Beast begins his analysis, Ma Savage interrupts him, demanding that Star-Lord remove his friends from her front yard. After exchanging more pleasantries, Kitty gets Beast back on track. He remarks from what they described, either the Vortex is a parlor trick or it could destroy galaxies and suggests hiding it. Rocket interrupts him, boasting that he wants to see himself with huge bulging muscles. As Beast pontificates on the pros and cons of using the Vortex, Storm catches an orphan staring into the Vortex and attempts to move him away, only to see her reflection of her cosmic-enhanced self.

One year after the advent of the Black Vortex, all of the Viscardi submit to the Black Vortex and end up destroying each other. Gara slays the last survivor, Adron, who, with his dying breath, urges her to destroy the Black Vortex. After snuffing the life out of her compatriot, she turns to Godhead and shouts at the Celestial, demanding to know if the destruction of her race was what he wanted. The Celestial then takes off to the stars, leaving Gara screaming in anguish while the Vortex is buried.

In the present, Gamora volunteers to try out the Vortex, but Storm is vehemently opposed to the idea, declaring they must destroy it. Unfortunately, the Slaughter Lords appear to reclaim the artifact. A fight breaks out between good and evil. In the midst of the fighting, Storm notices the Vortex is gone and Star-Lord adds so is Gamora. As Lydia checks in on him, he orders her to send an SOS. Czar Doon gets a hold of the Vortex, only to be impaled by Gamora, who received cosmic powers from the Vortex.

• The Black Vortex, an ancient artifact imbued with immeasurable power, is now in the hands of Mr. Knife!

• With billions of lives potentially at stake, Peter Quill, the Legendary Star-Lord, is going to have to dust off his thieving gloves.

• But with Knife’s Slaughter Squad protecting him, Peter’s probably going to need some help…

Retrieved from "https://heykidscomics.fandom.com/wiki/Guardians_of_the_Galaxy_%26_X-Men:_Black_Vortex_Alpha_Vol_1_1?oldid=1649960"
Community content is available under CC-BY-SA unless otherwise noted.