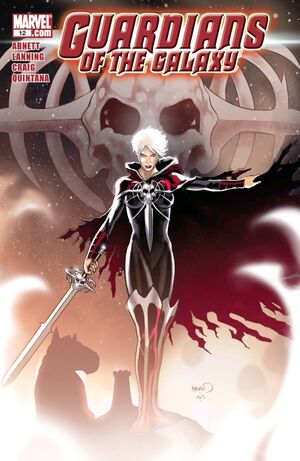 Well...we did it, my lord Oblivion...Death has a new avatar. And the End War is about to begin.

Phyla-Vell has a vision of Moondragon, warning her not to let the Dragon of the Moon use her. She then wakes up from her vision, seeing that she and Drax are about to be fed to the Dragon itself. Maelstrom, using the Quantum Bands, drops her first. But before he could do away with Drax, Wendell Vaughn appears, ramming into Maelstrom and freeing Drax. Unfortunately, Maelstrom smugly tells Vaughan that he's made of quantum light, linked to the bands, which means that he can throw him around like a puppet, which he does. However, Drax dismembers his arms, causing Maelstrom to rear in pain, while Vaughan reclaims the bands. Then suddenly, the Dragon of the Moon rises from its resting place. Vaughn, at Drax's suggestion, attempts to throw a lance at it but it only glances off its hide. Maelstrom cackles evilly, gloating that the Dragon will consume them both. But before it could, a bright red light shines out of the Dragon's belly, before a sword, resembling the Quantum Sword, pokes out. Its holder is Phyla, bearing a new costume and carrying Moondragon, who emerges out of the Dragons' gullet, as its body dissipates into a flock of bats. As they settle down, Vaughan offers to give the bands back to Phyla, but she refuses, stating that he is best suited to be Quasar. Vaughn reminds her that her sword will still draw power from the bands. Then, both he and Moondragon ask Phyla what did she do in the Dragon's gullet. She simply answers that she did what was necessary to rescue Moondragon, before kissing her; Drax and Vaughan look away awkwardly. Drax asks if Vaughn can join the Guardians, but he states that he must get back to Earth to help Richard Rider. He then notice that Maelstrom is gone, though Phyla believes that his plans are ruined. Vaughn acknowledges that but asks how are they going to get out of Oblivion, as only he can fly out. However, his friends fade away.

Back on Titan, Phyla and Drax have come back to life. The former angrily grabs Mentor, yelling at him for killing them in the first place. Mentor defends that he did it so they could rescue Moondragon and asks what happened to her in Oblivion. Moondragon then emerges in a new Titan-cloned body. She then thanks Drax and Mentor, before embracing Phyla. She then also asks what did she do.

Two hours later, in Oblivion, Maelstrom's arms crawl back to him and reattach themselves. He then finds a chess piece resembling Phyla and places it on the big chest board, which is actually the tiled cape of Oblivion himself. Maelstrom then comments to his master about the success of their plan: Death has a new avatar. He then declares that the "End War" is about to begin.

Retrieved from "https://heykidscomics.fandom.com/wiki/Guardians_of_the_Galaxy_Vol_2_12?oldid=1511984"
Community content is available under CC-BY-SA unless otherwise noted.