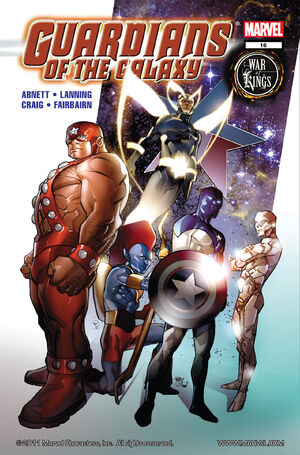 And you are Pain in Backside with your Zappy Tricks!

The future begins—and ends—here! Caught between the Shi’Ar and the Kree, and desperate to stop a conflagration that could implode the universe itself, Star-Lord leads the Guardians on their most reckless and deadly mission yet! But does the “Future Tense” of the enigmatic Starhawk and the original Guardians really hold the secrets our ragtag team seeks...or is it a really, really bad idea? Be there for a key War of Kings chapter in what CBR.com says is “... the one book that delivers every month.”

Retrieved from "https://heykidscomics.fandom.com/wiki/Guardians_of_the_Galaxy_Vol_2_16?oldid=1526197"
Community content is available under CC-BY-SA unless otherwise noted.