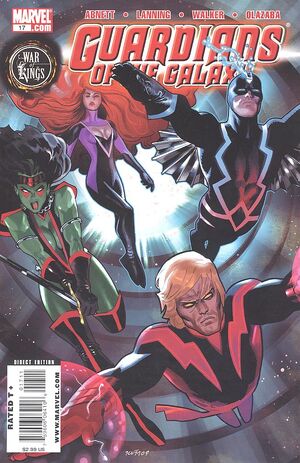 A WAR OF KINGS TIE-IN! In order to save the universe, Adam Warlock takes desperate action and seeks the help of allies you won’t believe! This must-read issue will have profound effects not only for the Guardians of Galaxy, but for the very Marvel cosmos itself! It’s more mind-blowing galactic action from the book Ain’t It Cool News describes as “just damn cool…Lanning and Abnett continue doing cosmic right.”

Retrieved from "https://heykidscomics.fandom.com/wiki/Guardians_of_the_Galaxy_Vol_2_17?oldid=1730929"
Community content is available under CC-BY-SA unless otherwise noted.