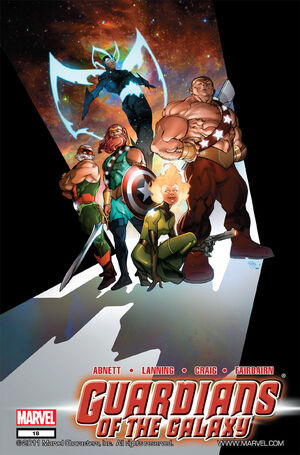 Jack, what the shug is going on? Cosmo's a puppy and Bug looks like an extra from Alien High School Musical!

Appearing in "Other Worlds, Other Wars."Edit

Synopsis for "Other Worlds, Other Wars."Edit

On another iteration of Earth, the 31st century Guardians of the Galaxy are battling their foes known only as the Keepers and their robotic Tripods. All the while, their leader Starhawk senses a deep flow of tachyons. It is then that the 21st century Guardians materialize in this future. The only problem is, Star-Lord is more elderly, Mantis is a baby, Cosmo's a puppy and Bug has been turned into a teenager; only Jack Flag remains unaged. The two Guardian teams team-up and fend off the tripods, before escaping to a safe-house. When Jack mentions to Starhawk that he looks different than the female version they met last time, the latter suddenly gains the memories of all the Starhawks that preceded him.

Starhawk goes on to explain to the 21st century Guardians that they have slipped into another iteration of the future, which is constantly in flux. As a result, the timestream is seeing them as anomalies and is rejecting them in certain ways. As for the matter of Jack, he is actually slipping into adjacent dimensions and therefore, will disappear from reality.

Seeing as they need to get back to the 21st century as soon as possible, the Guardians decide to sneak into Avengers Mansion, which is now the Keepers' command center. Using the tunnels leading to the mansion, they gain access to an underground vault, containing all of the Avengers' arsenal -- including Doctor Doom's time machine. But before they could use it, the Guardians suddenly tumble through different versions of the future, before landing in a future where Magus and the Universal Church of Truth rule.

Retrieved from "https://heykidscomics.fandom.com/wiki/Guardians_of_the_Galaxy_Vol_2_18?oldid=1432078"
Community content is available under CC-BY-SA unless otherwise noted.