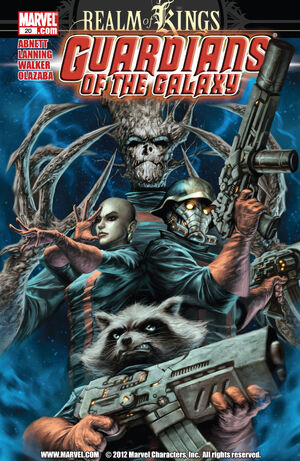 A REALM OF KINGS story! The Guardians have been to hell and back on a desperate quest to save the past, present and future of the universe itself. But after their monumental efforts and terrible sacrifice, could it be that—due to the end of WAR OF KINGS and the creation of The Fault—the universe is an even more dangerous place than before…and they just don’t realize it yet? Yes, it’s time to shake up the team line-up again in the book that Newsarama’s Best Shots calls “Marvel’s most enjoyable team book…There’s a tremendous amount of action punctuated by some terrific humor and character development.”

Retrieved from "https://heykidscomics.fandom.com/wiki/Guardians_of_the_Galaxy_Vol_2_20?oldid=1732326"
Community content is available under CC-BY-SA unless otherwise noted.