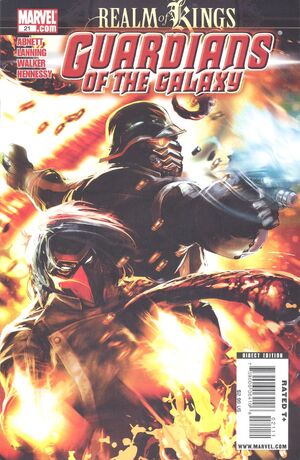 It's...it's an abominable place. A universe like ours, except that it is twisted and deformed by malignant growth. A cancerverse. Peter, it is a universe where life has won. ... I mean death has lost.

The xenoform that had been inhabiting Luminal Massdriver's body is trying to infect Moondragon. Luckily, she is able to telekinetically reject it. Luminal leader Cynosure attempts to help her comrade but Moondragon states that Massdriver is dead. She then telekinetically contains the Xenoform, just as the Guardians arrive. Star-Lord snaps at Cynosure for going behind his back; Cynosure defends that they have every right to send their own expeditions into the Fault; Star-Lord points out that the Fault is something neither of them know about, that they'll have to be careful about.

The Guardians quickly rush Moondragon off to quarantine, where she is able to use her telepathy to calm the alien; Star-Lord is more happy if it was able to rid them of Cynosure; Moondragon states that the xenoform needs a telepath to contain it, otherwise Cynosure's brain would have been liquefied. She says from what she had learned from it, there is another universe at the end of the Fault, described as twisted and deformed, a cancer-verse, where "life has won" and "death has lost". The Luminals then barge in, demanding that the xenoform be extradited for trial. Even worse, Cynosure had cuffed herself and Moondragon with biometric cuffs that will kill both of them if the cuffs are tampered with or removed.

The matter is brought before the Knowhere Administrative Council. Chairman Gorani wants the xenoform off Knowhere. However, Drax asserts that Moondragon, being his daughter, is his responsibility, which Gorani grants. This buys the Guardians three more hours to figure out a way to extract the xenoform and send it packing.

Drax decides to visit Moondragon. But when he reaches her room, he finds the Church worshippers attempting to haul her and Cynosure away. They attempt to eliminate any witnesses, including Drax but he fights them off. However, he is mesmerized by a Matriarch's beauty, before she inflicts on him the pain he had experienced. The Church worshippers then prepare to transport Moondragon so she can give birth to their new god.

Retrieved from "https://heykidscomics.fandom.com/wiki/Guardians_of_the_Galaxy_Vol_2_21?oldid=1432081"
Community content is available under CC-BY-SA unless otherwise noted.