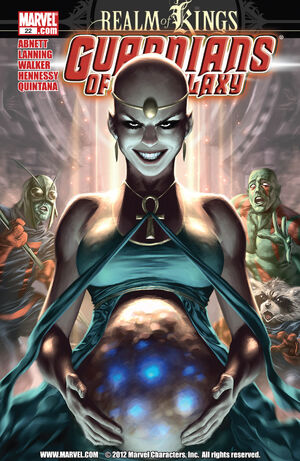 Don't apologize. Remember, we still hold one supreme advantage over them. They think I'm dead. And while they believe that, they will be absolutely unprepared for what I am about to unleash.

The Church of Universal Truth has kidnapped Moondragon, along with Cynosure, who is cuffed to her, so that billions of their worshippers on the planet Orison can witness the birth of their new "god". However, Moondragon knows that the combined energies from the worshippers would make the xenoform inside her rampant and the birth would kill her. She also threatens that she'll kill the Church Matriarch for inflicting her father Drax with the pain he had suffered in his life. The Matriarch refuses to listen and orders her acolytes to lower the platform beneath them.

Moondragon urges Cynosure to escape while she still can. The latter refuses, as she can't get past the guards in front of them. She feels confident that the Luminals will come for her. Unfortunately, the life energies on Orison are driving the xenoform wild, causing Moondragon great pain; Cynosure advises that she cross her legs. Then suddenly, Star-Lord pops, guns at the ready; the Matriarch calls him made for a foolish attempt at rescue.

Fifteen minutes ago, Star-Lord and Rocket Raccoon are on the surface of Orison. The former feels that it is crazy to take on countless worshippers. However, Rocket comes up with a plan. The plan involved bringing Knowhere itself crashing onto Orison. Then, the Guardians of the Galaxy and all members of the Luminals, including full, reserve, retired, substitute, sidekick and honorary member on Xarth, attack. Drax himself, having recovered from his painful memories, because he feels more human since joining the Guardians. He takes on one of the Matriarch's Cardinal bodyguards and kills him through a stab in the head. However, the xenoform is raging inside Moondragon and is ready to come out. She then sees a vision of Phyla-Vell, her deceased lover, encouraging her to hold on.

As soon as the Guardians and Luminals escape Orison, they move Knowhere back to the edge of the universe. It is then revealed that Star-Lord placed Knowhere's entire population in Cosmo's tesseract storage crystal. Upon release, Chairperson Gorani declares that they will eject the Guardians from Knowhere. However, Cynosure and the Luminals stand up for their colleagues and suggest that Gorani reconsider, leaving him baffled.

The Guardians then extract the xenoform from Moondragon and use the Continuum Cortex to send it back into the Fault. While everyone retires, Moondragon tells her father that she saw a vision of Phyla and feels that she is alive.

Meanwhile, on the Church homeworld of Sacrosanct, the Matriarch reports to their leader of their failure. However, their leader, revealed to be Magus, well and alive, says that they have one advantage over the Guardians -- they think he is dead. He promises his followers that their foes shall be unprepared for what is going to happen. Behind him in bubbles are Phyla, Cosmo, Gamora, Major Victory and Mantis.