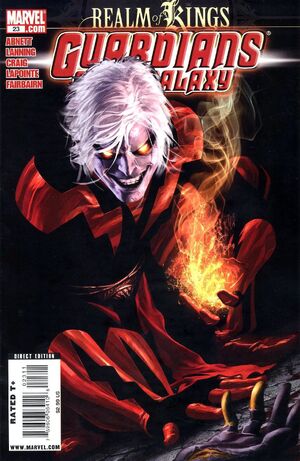 A REALM OF KINGS TIE-IN—GUEST-STARRING MAGUS! Star-Lord and the Guardians risked everything and suffered terrible losses in their epic, cross-time battle with Adam Warlock’s evil half. Except...everything they—and you—know could be wrong. Welcome to what’s really going on! Welcome to the kingdom of Magus! It’s all waiting for you in the book that has CosmicBookNews.com raving “DnA are mining the Marvel vaults for cosmic characters that have lain dormant for far too long…Guardians of the Galaxy consistently delivers the perfect balance of action, adventure, humor, drama, excitement, and unpredictability.”

Retrieved from "https://heykidscomics.fandom.com/wiki/Guardians_of_the_Galaxy_Vol_2_23?oldid=1723068"
Community content is available under CC-BY-SA unless otherwise noted.