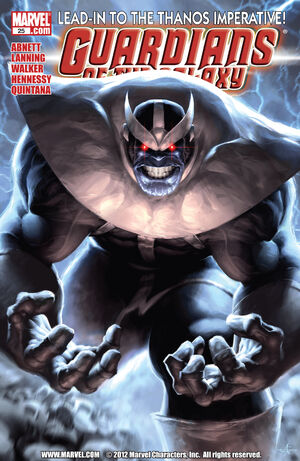 He’s back…Thanos! How did he return? Why is he back? And what does the appearance of the galaxy’s #1 threat mean for our rag-tag band of universal protectors? Find out in the next issue of the comic that CosmicBookNews.com calls “Awesome. Amazingly, jaw-droppingly awesome.”

Retrieved from "https://heykidscomics.fandom.com/wiki/Guardians_of_the_Galaxy_Vol_2_25?oldid=1732327"
Community content is available under CC-BY-SA unless otherwise noted.