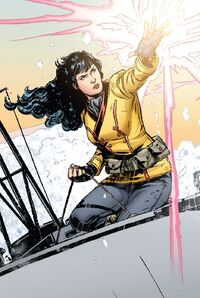 Gwenny Lou Sabuki was a Japanese-American citizen who like all Japanese-Americans was rounded up during WW2 and placed inside a relocation camp. From this camp she was kidnapped, along with her father, Dr. Sam Sabuki, by Agent Axis, a super-powered operative for the Axis powers.

As a result, she was present at a stateside battle in which sidekicks Bucky Barnes and Toro (Thomas Raymond) of the superhero team the Invaders fought Agent Axis. Axis placed her, Davey Mitchell, Bucky and Toro into a machine designed to restore Agent Axis to his normal form. Before this could take place Bucky and Toro tried to escape, and in the ensuing brawl one of Sam Sabuki's machines exploded, granting superpowers to Gwenny Lou and David Mitchell.

Gwenny Lou gained the power to generate light and energy and project golden force beams from her hands, while Mitchell gained the ability to spin at superhuman speeds; she became Golden Girl, he the Human Top. The four youthful heroes defeated Agent Axis, and later formed the Kid Commandos, who were allied with the adult Invaders.

Gwenny Lou later helped found the post-war version of the British superhero team the V-Battalion. Eventually changing her superhero name to Golden Woman, she died in 1961. Her son became the superhero Golden Sun, while her granddaughters became Goldfire and Radiance.

Retrieved from "https://heykidscomics.fandom.com/wiki/Gwendolyne_Sabuki_(Earth-616)?oldid=1733332"
Community content is available under CC-BY-SA unless otherwise noted.