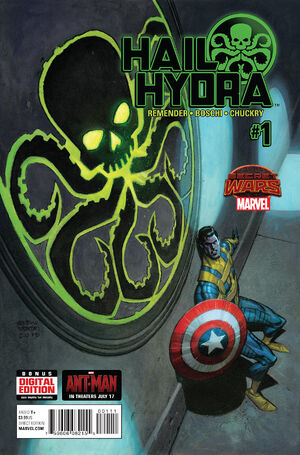 The hell're you on about, nuts? Hydra didn't take over New York... Hydra founded New York.

Trapped in a Hydra base with Baron Zemo, Nomad - Ian Rogers, the Man Without a Country - was able to escape using Hydra's experimental Infinite Elevator. Landing in New York, Nomad remembers an incident from his childhood - when he pulled a gun on Captain America, but Cap talked him down, getting him to choose the name of Ian Rogers over his birth name of Leopold Zola.

Looking around, Nomad sees large amounts of Hydra iconography, marked by the vast beaming face of Arnim Zola on half the screens on the street. Realizing that something is up, Nomad asks the first person he sees - a teenage graffiti artist - when Hydra took control. Confused, the young man says the city was founded by Hydra.

A roving squad of Hydra guards with jetpacks sees them, and the duo run. Nomad is able to outpace the guards and the other man, but goes back when the guards start brutalizing the other man. Beating up the squad, he knocks out almost everyone but is unable to stop the guards from putting the man into a lock-up vehicle. Running back into the shadows, Nomad realises that Hydra's control is too ingrained to be a thing of weeks or even years, but would have to be generational. Nomad is about to back to the Infinite Elevator, to try to find a way home, but he realises that he got the kid caught. And so, he stays to free him.

Elsewhere, the graffiti artist is processed before a large screen by Arnim Zola himself. He is taken away, but Zola wants to know more about the other man. When he discovers there is no information, he deputizes Grant Ward, Agent of Hydra, to find it.

The graffiti artist is brought to a bio-factory, to be burned alive and used for parts. However, he is saved at the last minute by Nomad, who swiftly frees him and everyone else who was about to die. Everyone runs.

Pausing for breath on a rooftop, the graffiti-ist introduces himself as Chris Miller, a citizen of the United Confederaton of Hydra. Arnim Zola rules the land and pays fealty to God Emperor Doom. Everyone in the nation pays fealty to Zola in turn, or they are eventually sent to a bio-factory, where their mass is used to construct soldier mutates that keep everyone safe from the "outlying zones". Chris claims that he will help Nomad get in contact with the underground... mere seconds before he is decapitated by a thrown round shield.

The owner of the shield, wearing a cross between a Hydra guard uniform and the Captain America costume, announces that the escapees are being rounded up as he speaks. Enraged, Nomad attacks the newcomer, angry that he is perverting the legacy of Captain America. The newcomer pauses when he sees Nomad's face, but the reason why isn't clear until Nomad manages to knock his helmet - revealing the man to be his body double, who angrily exclaims that whatever his father has cooked up, there is is only one Leopold Zola.

• Hail Hydra! Immortal Hydra! We shall never be destroyed!

• Cut off one limb, and two shall take its place!

• We serve none but the Master—as the world shall soon serve us!

• It is a beautiful Utopia that Hydra has created.

• But when a lone figure from outside the Regime appears, could his very presence be enough to bring this perfect society to its ruin?

Retrieved from "https://heykidscomics.fandom.com/wiki/Hail_Hydra_Vol_1_1?oldid=1433893"
Community content is available under CC-BY-SA unless otherwise noted.