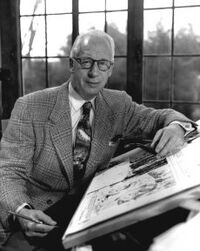 Harold Rudolf Foster (August 16, 1892 – July 25, 1982), better known as Hal Foster, was a Canadian-American illustrator best known as the creator of the comic strip Prince Valiant. His drawing style is noted for a high level of draftsmanship and attention to detail.

Born in Halifax, Nova Scotia, Canada, Foster rode his bike to the United States in 1919. In 1928, he began one of the earliest adventure comic strips, an adaptation of Edgar Rice Burroughs's Tarzan. In 1937, he created his signature strip, the weekly Prince Valiant, a fantasy adventure set in mediaeval times. The strip featured Foster's dextrous, detailed artwork; Foster eschewed word balloons, preferring to have narration and dialogue in captions.

Born in Halifax, Nova Scotia, Foster was a staff artist for the Hudson's Bay Company in Winnipeg and rode his bike to Chicago in 1919 where he studied at the Chicago Academy of Fine Arts and soon found illustration assignments. The illustrator J. C. Leyendecker was an early influence on Foster.[1]

Foster's Tarzan comic strip, adapted from Edgar Rice Burroughs's novels, began October 20, 1928. Foster returned to do the Tarzan Sunday strip beginning September 27, 1931, continuing until Burne Hogarth took over the Sunday Tarzan on May 9, 1937.[2] He soon grew tired of working on an adaptation and began planning his own creation.

William Randolph Hearst, who had long wanted Foster to do a comic strip for his newspapers, was so impressed with Foster's pitch for Prince Valiant that he promised Foster a 50-50 split of the gross income on the strip, a very rare offer in those days. Prince Valiant premiered on February 13, 1937, continuing for decades. In 1944, Foster and his wife Helen moved from Topeka to Redding Ridge, Connecticut. In 1954, the couple was seen on television's This Is Your Life. In 1971, the Foster retired to Spring Hill, Florida. In 1967, Woody Gelman revived some of Foster's earlier work for his Nostalgia Press.[3]

In 1970, Foster was suffering from arthritis and began planning his retirement. He had several artists draw Sunday pages before choosing John Cullen Murphy as his collaborator and permanent replacement in 1971. Murphy drew the strip from Foster scripts and pencil sketches. Foster stopped illustrating (and signing) the Prince Valiant pages in 1975. For several years, he continued writing the strip and doing fairly detailed layouts for Murphy, eventually doing less and less of both the writing and art until prolonged anesthesia during an operation took his memory and he no longer remembered ever doing Prince Valiant.

Foster was 73 when he was elected to membership in Great Britain's Royal Society of Arts, an honor given to very few Americans.

Foster's impact on comic art was especially significant in the development of adventure strips, due to his controlled compositions, action scenes and detailed drawings of human anatomy and costume. His Prince Valiant pages were much admired by other artists, and he became a key influence on several generations of artists who were creating realistic comic strip and comic book illustrations, including Joe Kubert, Frank Frazetta, George Pratt, Mark Schultz, William Stout, Warren Tufts, the British illustrator Bill Ward, Al Williamson and Wally Wood.

Foster was recognized for his work by the National Cartoonists Society with the Reuben Award in 1957, the Story Comic Strip Award in 1964, the Special Features Award in 1966 and 1967, all for Prince Valiant. He received the Elzie Segar Award in 1978 and the Gold Key Award (their Hall of Fame) in 1977. Foster was inducted into the Will Eisner Award Hall of Fame in 1996 and the Joe Shuster Canadian Comic Book Creators Hall of Fame for his contributions to comic books in 2005. The latter award was accepted on behalf of the family by writer-artist Dave Sim, a longtime admirer of Foster's work.[6]

Foster was inducted into the Society of Illustrators Hall of Fame in 2006.[7]

Retrieved from "https://heykidscomics.fandom.com/wiki/Hal_Foster?oldid=461760"
Community content is available under CC-BY-SA unless otherwise noted.