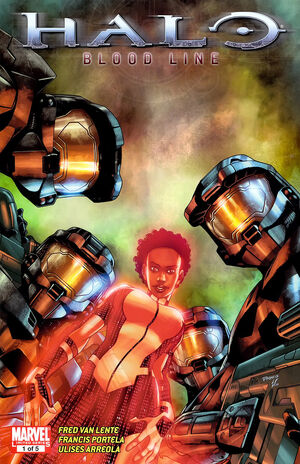 Based on the Best-Selling X-Box Game! The Spartan team codename: Black is the top-secret unconventional warfare unit of the United Nations Space Command’s Office of Naval Intelligence, engaging in sabotage and assassination missions deep inside Covenant space. But when this quartet of super soldiers is shot down over a desolate moon along with a Covenant cruiser, humans and aliens will have to forge an uneasy alliance against a common foe before an eons-old threat destroys them both!

Retrieved from "https://heykidscomics.fandom.com/wiki/Halo:_Bloodline_Vol_1_1?oldid=1432174"
Community content is available under CC-BY-SA unless otherwise noted.