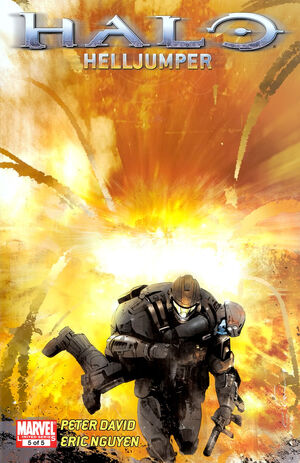 Dutch and Romeo have gotten themselves into some pretty crazy situations, but stealing a Covenant ship would definitely get a medal for Most Insane Thing Done In the Line of Duty. If they survive this, they’ll still have plenty of questions to answer: what the heck are the Covenant doing here on Planet Ariel, an otherwise harmless colony? And why are they acting so strange—taking the humans hostage instead of glassing the planet, which is their M.O.? Whatever’s lurking deep underneath the surface, if the Covenant wants it that bad, it has to be big… and deadly. DON’T MISS THE GRIPPING CONCLUSION TO THIS HEART-STOPPING STORY!

Retrieved from "https://heykidscomics.fandom.com/wiki/Halo:_Helljumper_Vol_1_5?oldid=1432195"
Community content is available under CC-BY-SA unless otherwise noted.