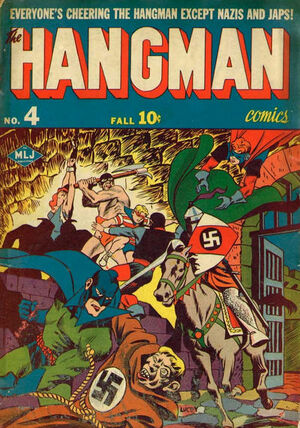 We'll, there he is. He fell for my trap this time with grimmer results than I'd reckoned! He caught his neck in a vine — and hanged himself!

Appearing in "Mr. Howard and the Hunter"Edit

Synopsis for "Mr. Howard and the Hunter"Edit

Due to a mix-up, a German spy has his briefcase full of "American secrets," go missing. The Hunter has been sent in, from Berlin, to kill whoever he has to to in order to find it.

Retrieved from "https://heykidscomics.fandom.com/wiki/Hangman_Comics_Vol_1_4?oldid=1476588"
Community content is available under CC-BY-SA unless otherwise noted.