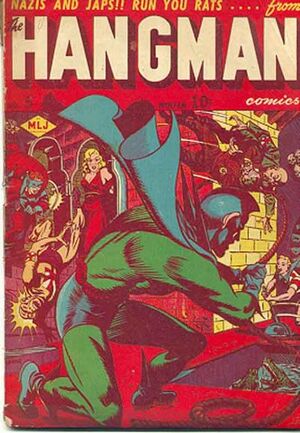 So you killed The Prophet, eh, Rand? Well I heard his last prophecy! And I'm going to see to it that it comes true!

Appearing in "The Voice of Doom"Edit

Synopsis for "The Voice of Doom"Edit

It's December 7, 1941 and for the last week an odd old man has been shouting on the streets about "death from the skies." When it is announced over the police radio that the bombing of Pearl Harbor is happening, he is suspected of being a spy. He is taken to court and released on bail by gangster Dixie Rand, who hopes to use the old man's prophecies for his own evil purposes.

An artist creates paintings of how his victims will die, and the Hangman isn't sitting still for his portrait.

Retrieved from "https://heykidscomics.fandom.com/wiki/Hangman_Comics_Vol_1_5?oldid=1476589"
Community content is available under CC-BY-SA unless otherwise noted.