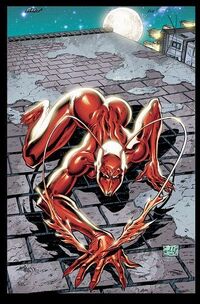 Ant (Hannah Washington) is a comic book superhero in the Image Comics Universe. She first appeared in Ant volume 1 #1 (March 2004), however, the comic was with Arcana Studios at the time. Ant was created by Mario Gully and is currently published by Image Comics.

The original Arcana mini-series followed 8-year-old Hannah Washington, a lonely young girl continually tormented and bullied at school. Her father is a suspect in an armed robbery and is taken into custody. To escape the harsh realities of her life, she writes in her diary stories of an alter-ego: an adult version of herself who is a superhero known as Ant.

Hannah appears to know more about the world than she should and often has the personality of an emotionally unstable young adult, and her new principal takes interest in her as a result.

She ends up dropping her diary, and it is read and returned by her friend Stephen, who appears as "Gadget Man" in Ant's Cockroach battle, the events of which we follow whenever Hannah's diary is read or written into.

Hannah's father was released from custody but eventually, his home gets raided as they apparently have the evidence they need to put him away. Hannah is found foaming at the mouth, having a seizure on the floor.

The son of the man he killed pushes for the death penalty - which would normally be a severe punishment, but thanks to his influence, his demands are met and Hannah's father is sentenced to death.

We find Hannah's mother, Betty, left many years ago and she makes an unwelcome step back into Hannah's life. However, after reading her diary she comes to the conclusion that it was a mistake to leave.

Meanwhile, Ant is beaten by the cockroach and loses her exoskeleton. Stephen later gives her a can which recharges her bloodsugar and her exoskeleton grows back. She then defeats the Cockroach.

Hannah finally manages to obtain information using Ant to clear her fathers name - when told this is impossible even as she said Ant was who she would be in the future, she blacks out, outbursts and eventually ends up in a straitjacket. She manages to escape, leaving behind one of the cans she used to regenerate her exoskeleton in her story, leading on to the second volume.

An adult Hannah Washington wakes up in a mental institution, where she's been told all her memories are the result of a coping mechanism described as a "juvenile power fantasy." But, little by little, her fantasies of her life as Ant become more and more real.

Ant possesses the typical enhanced speed and strength of many bug-based superheroes, but in addition she has antennae which provide her with super-human level senses. One of the more interesting aspects of the character is her exoskeleton, which appears to be regenerated by use of her blood-sugar. When her armor wears down, it breaks off rather quickly and she must recharge her blood-sugar in order to regenerate it. She seems to use some kind of spray-can with an ant symbol to do this.

Retrieved from "https://heykidscomics.fandom.com/wiki/Hannah_Washington?oldid=1571019"
Community content is available under CC-BY-SA unless otherwise noted.