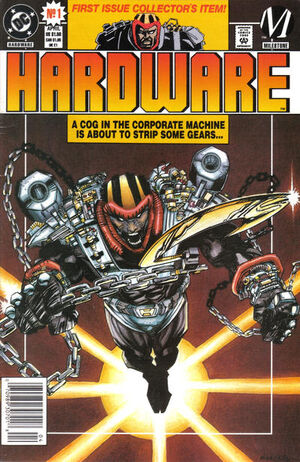 When I was a kid, I used to have this parakeet. And sometimes, when I'd open up his cage to clean it... he'd escape. The little bird would see the backyard and make his move. Invariably, he'd head straight for the window, fast as he could. And inevitably, crack his head on the windowpane... a barrier of glass, unseen and incomprehensible to him. So he'd try again, over and over... until, spent and defeated, he couldn't try any longer. My bird made a common error. He mistook being out of his cage... for being free. The parakeet died a long time ago, without ever enjoying the freedom of the yard. The boy grew into a man, who spent many years bumping his head against a similar barrier: a ceiling of glass, unseen and incomprehensible to him. The lesson is clear: escape is impossible until one perceives all of the barriers. My name is Curtis Metcalf. But you can call me Hardware.

After conducting a successful raid on the corrupt Alva Technologies, which leads to the death of multiple Alva helicopter pilots, Curt Metcalf returns to his job and broods. He remembers his first interactions with Edwin Alva, his arch-nemesis and current employer.

Discovering young Curtis at the age of 12 in a science fair, and viewing him as having immense potential, Alva personally funded the boy's advanced schooling through most of his young life, and even into college, where he received his first degree at age 15. Eventually Curtis was asked to come to work at Alva Technologies, where his inventions made the company millions of dollars. He worked happily, and even considered Alva somewhat a father to him, until one day when he asked for a share of his own profits. Alva informs Curtis of his complete lack of respect for him, and how he views him more as a useful tool, or a pet, than anything else, crushing any of Curt's further aspirations. Furthermore, he finds he is contract bound to only be able to work for Alva, and nobody else if he wishes to continue in his field of business. Enraged, Curt looked for potential ways to blackmail Alva. He is shocked to find that there is hardly a single thing about Alva that isn't crooked, and that he's a full-fledged international criminal. Deciding to instead bring Alva down completely rather than just blackmail him to get out of the contract, Metcalf spends weeks composing a full summary of his criminal activities, and sends it to several different branches of law enforcements, including multiple media outlets. Curtis is further angered when his action has no repercussions, and he realizes that Alva is beyond the law. Using the technologies made available to him (ironically by Alva himself), Curtis decides to create the identity of Hardware, using a technological exo-skeleton and arsenal to combat Alva's corrupt operations by night while he works for him by day.

When night falls again, Hardware launches another assault, this time on a storage facility Alva is using to hold weaponry. He is ambushed by a super-powered enforcer for Alva with the ability to duplicate his body, calling himself "Reprise".

Retrieved from "https://heykidscomics.fandom.com/wiki/Hardware_Vol_1_1?oldid=1665532"
Community content is available under CC-BY-SA unless otherwise noted.