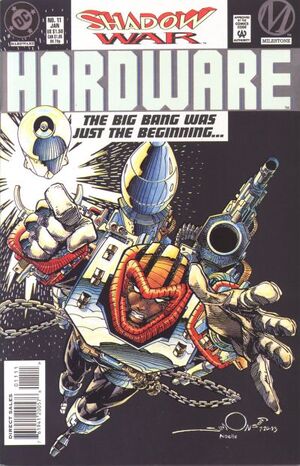 I never thought about dying before. It makes me want to live.

Appearing in "Shadow and Act"Edit

Synopsis for "Shadow and Act"Edit

The mysterious Dharma, leader of Shadow Cabinet, sends his agent Iron Butterfly to meet and recruit Hardware. Meanwhile, still recovering from his fight with Harm,[1] Hardware is fighting against Transit. Having been teleported by Transit to their secret base, Harm meets the rest of a group calling themselves "Star Chamber", a rogue faction of the Shadow Cabinet who believe that Dharma has become corrupt, and are recruiting new members determined to stop him. Blackmailed by Headmaster over his secret identity, Harm agrees to do a mission for them. After defeating Transit with his Plasma Whip, Hardware is approached by Iron Butterfly, who informs him of the Star Chamber's destructive plans, and offers him membership into Shadow Cabinet. Although he initially requires persuading, Butterfly convinces Hardware, using the rhetoric that while he continues his personal vendetta for justice against Edwin Alva, he could be doing good on a global scale working for an agency like hers. After accepting, Hardware has a personal epiphany about life, and realizes that he should be treating things more seriously. He goes to visit Barraki, tells her that he loves her, kisses her, and leaves.

Retrieved from "https://heykidscomics.fandom.com/wiki/Hardware_Vol_1_11?oldid=1433429"
Community content is available under CC-BY-SA unless otherwise noted.