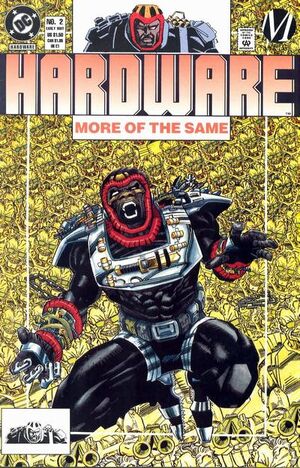 This doesn't have to continue. I can end it. One final mission. No more endangering the innocent. No more pointless engagement with those who are irrelevant to my cause. Today it ends, with one final descent into this pit of my own elaborate construction. The answer was always there. I just refused to see it. All the evils I battle have one father. And in more ways than one, he's also my father. Kill the source of the corruption, and the corruption dies as well. And as sure as the sunrise, Edwin Alva will die at my hands.

Edwin Alva ponders the problem of Hardware, wondering who he is, and where he came from. He satisfies himself with the fact that Hardware will soon be dead at the hands of his self-replicating hired assassin, Reprise.
Elsewhere, Hardware has just been ambushed in a warehouse by the aforementioned. Faced with a seemingly infinite member of gunmen to fight against, Hardware determines it might be better to leave. Although the violent mob makes it difficult for him to escape, he eventually makes contact with Skylark and flies out shortly before blowing up the entire warehouse. Afterwards, he decides to go home and rest.
When Curtis doesn't call into work the next day, a concerned colleague of his contacts his friend Barraki Young inquiring as to his whereabouts. That evening, Barraki decides to pay a visit on Curtis, and walks in on him still covered in the liquid metal his armor is primarily composed of. Curtis is forced to reveal his secret identity to her, and the two have a long talk about Hardware. Barraki is not impressed, and accuses him of being a remorseless killer pursuing his own selfish needs, in the guise of moral action. She then leaves him alone to think. Curtis decides that she is right, and that his activities as Hardware have been often unnecessary and excessive. Rather than continue his crusade for an elongated period the way it had been going, he decides to end the conflict once and for all. He plans to simply murder Edwin Alva, and be done with it.

Retrieved from "https://heykidscomics.fandom.com/wiki/Hardware_Vol_1_2?oldid=1433420"
Community content is available under CC-BY-SA unless otherwise noted.