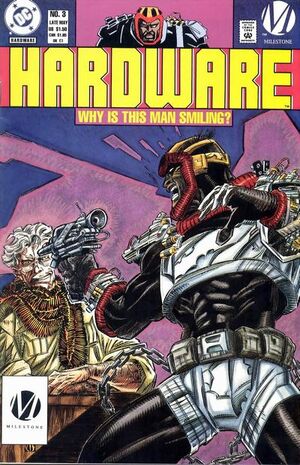 Not yet. Not before I tell you what I've been up to all night. First, I hit your safe. I've taken your personal journal, your research notes and anything else that might help me to piece together the structure of your organization. I couldn't crack the security on your computer, not in the time available. So I copied everything. I'll browse through the stuff at my leisure. With that information, I'm going to take your organization apart, piece by piece. When I'm finished with you, you'll be living on the street. And one night, as you're scrounging for a meal from a garbage can, cursing the day you ever heard my name. One night, after you realize you're as low as you can go and that I'm the one who put you there -- I'll walk up to you, drop a nickel in your beggar's cup -- and then I'll kill you.

Having determined that he must finally kill Edwin Alva, Hardware launches a one-man assault on the Alva Technologies building. Although initially intending to embark on a violent rampage, an encounter he has with Barraki Young, seeking her approval, persuades him to do things more subtly. He infiltrates the complex, subduing a large number of guards who attack him non-lethally. Assuming that Hardware is some sort of mercenary, Alva attempts to hire him on an immensely large salary. Hardware becomes enraged at Alva's continual attempts to bribe him, and he horribly beats the man. Hardware announces to Alva his intention to break him rather than kill him, and instead of ending his life, leaves him bleeding and mildly crippled in his office and takes off with all of Alva's secret files downloaded into his on-board computer. After Hardware leaves, Alva places a call on his communicator, and sends a gigantic technological soldier (a "SYSTEMatic") after him, to kill him.

Retrieved from "https://heykidscomics.fandom.com/wiki/Hardware_Vol_1_3?oldid=1433421"
Community content is available under CC-BY-SA unless otherwise noted.