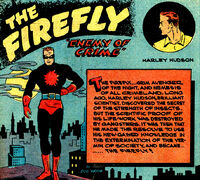 Harley Hudson was a biochemist who discovered how to imitate the muscular strength of insects. He would use these powers to become the hero Firefly.

In his first case, he applied for a job as a chemist's assistant, but soon realized he was only going to be a guinea pig for Dr. Dread's evil experiments. After confronting the doctor's monster, he rescued another "subject," who was newspaper reporter Joan Burton. Because they escaped the doctor together, she knew of Harley's double life from the start. She became his girlfriend and confidant.

Firefly mostly fought off threats steaming from the supernatural and/or voodoo related mysteries. In fact, his own disappearance is somewhat a mystery.

While shipwrecked, Firefly and several survivors were washed up on an island. When the moon's strange glow began to madden them to kill one another, Sheba, Empress of Ethiopia, rode up in her chariot confronting the fighting men. Because Firefly was the strongest (last man standing), she demanded him to go back to ancient Ethiopia and be her King. He agreed, and they traveled through time to reign the kingdom together.