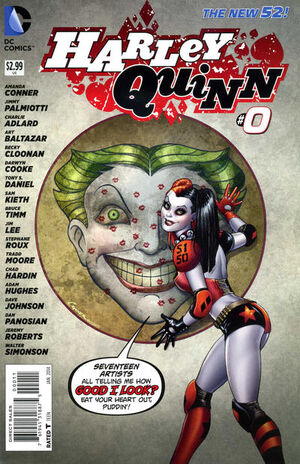 I would be instigating mayhem everywhere I go!

Harley Quinn wonders what her life might be like if it were a comic book, and wonders, then, who would create that book. She imagines that she might be able to garner the talents of Jimmy Palmiotti, famed for writing about cowboys, and Amanda Conner - equally famed for drawing big boobs. Angrily, Amanda and Jimmy take issue with this narrow view of their talents. Harley is disturbed to be hearing these voices from nowhere, but her next artist choice is Becky Cloonan.

Becky's artistic license is to make Harley into a rock star, but unfortunately, the audience is not impressed with her music. In response, Harley shoots her own band to death - though she blames this on her artist, so Jimmy and Amanda offer her something different.

Tony Daniel opts for a giant robot/godzilla theme, and Harley crashes through New York City, taking the opportunity to eat Citi Field. The writers are unimpressed, though, and opt for another artist.

Stephane Roux has Harley bust crime in international waters on the back of a dolphin. She rescues a group of scantily clad muscle-men from spanish pirates, and she is pretty impressed with Roux's work - but Amanda and Jimmy have other plans.

Dan Panosian dreams Harley up a spot as the hot secretary in an office pool of advertising geeks - and while she likes the style, the motif is tired. Amanda suggests that she try taking charge, so Harley forcefully orders the fellows in the office to fetch her the boss. The boss, of course, is the Joker. There mere sight of him has Harley reeling, and the writers decide to change things up before things get too explicit for print.

Harley finds herself as some kind of ninja, and she likes it. Likes it so much, in fact, that her lust from the previous page carries over to the artist for this one: Walt Simonson. Unwilling to raise the ire of his wife, Weezie, the writers move on.

Harley is impressed to learn that Jim Lee was chosen for her next page, but is dismayed to learn that the page is a reprint of an earlier Lee work - albeit digitally tweaked for her new costume. Demanding an original page, rather than a reprint, the writers decide that Bruce Timm will have to suffice instead.

After being handed a lengthy contract regarding her appearance in a Bruce Timm work, Harley bails, and is surprised to wind up on the Joker's desk in a negligée. Grumpily, he warns her to go away, and noticing the audience in front of her, she realizes that they're expecting a line from her. Offstage, Poison Ivy prompts her with the line. The line makes Harley a little embarrassed, so she tries remember what you're supposed to do when you've got stage fright. Failing to get it right, she appears naked in a crowded church, and sings out: "Aw, c'mon puddin', don'tcha wanna rev up your Harley?!"

Jimmy and Amanda decide it might be better if they move on to artist Charlie Adlard, who imagines Harley onto a soccer pitch, where the rest of her team mocks her poor playing skills. Aware that this is a dream sequence, Harely produces a gun out of thin air, and murders the rest of the team - something she is good at, at least.

Harley's next destination is confusing. Blue pencil roughs are all she is, but Amanda and Jimmy assure her that he who has drawn them is the amazing Adam Hughes. While she is impressed by his finished work, he isn't known for keeping up a monthly schedule, and so she asks for someone else.

That someone else is Art Baltazar - quite capable of both a monthly schedule and colouring his own art! Harley isn't exactly impressed with the Tiny Titans and the cutesy art, and so she produces an over-sized hammer, and smashes the heck out of them - only to grieve the fact that she can't actually hurt anyone.

Tradd Moore places Harley in a high-speed chase with Poison Ivy but the whole scene is too cliché, with a dozen cop-cars behind them, and a cliff ahead. Just as the car is heading towards an impending doom, Harley begs for something happier.

Jeremy Roberts takes a cue from Harley's role in Suicide Squad, and as such, places her in a series of suicidal situations - none of which are particularly pleasing for her.

Moving on, Sam Kieth places Harley in a swamp, where she imagines the Joker - but he transforms into a monster and plans to eat her. Alas, Harley is forced to kill it with a hammer, and selects a different artist.

Darwyn Cooke was meant to draw Harley riding a moose in Canada, but opted instead to have she and Catwoman rob the writers at their own wedding. Jimmy won't stand for it, and attempts to handle them Brooklyn Style, only to be knocked unconscious. Amanda, though, avenges him easily, and finishes out the wedding.

Harley wants the book for herself, though, and wakes up from her dream annoyed that none of the artists she saw were keepers. Her attention is caught, though, by a box of older comics, and when she looks inside, a bomb suddenly blows her up. Recovering grumpily, she spies an open book and decides that she likes the art in it.

Suddenly, a car pulls up in the wreckage and the man inside explains that as per the will of an anonymous benefactor, he must execute his wishes that she be given a four-story property on Coney Island. Harley is moving to Brooklyn.

Retrieved from "https://heykidscomics.fandom.com/wiki/Harley_Quinn_Vol_2_0?oldid=1431255"
Community content is available under CC-BY-SA unless otherwise noted.