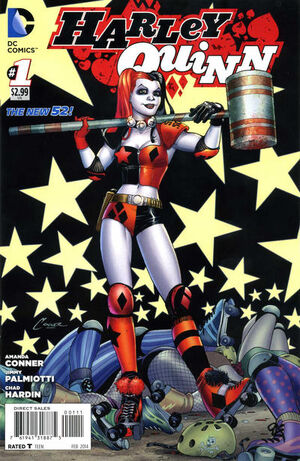 Understood, Dr. Hertz. Too much of anything is no good. Not.

Appearing in "Hot in the City"Edit

Synopsis for "Hot in the City"Edit

After an old patient from Arkham Asylum left Harley Quinn an apartment building in Coney Island in his will, she has packed up her entire life to make the big move to New York. When her motorbike and sack full of junk are stopped at a red light, she is disturbed to watch a man dragging his dog across the street. Angrily, she fishes for a bullwhip from her sack, and snaps through the dog's leash before wrapping it around the dog-walker's neck. Gleefully, she adopts the dog on the spot, towing its former owner by the neck as she speeds through the now green light.

As she continues on her way, a mercenary happens to spot her, and given the reward for Harley's head, he decides to claim it for himself. Pulling a gun, he causes several car accidents that result in the majority of Harley's remaining valuables falling off the back of her bike, and filling the roadway. Annoyed, she fumbles around in that mess, searching for her hammer. First assuring that her new dog is alright, she approaches her would-be headhunter, and demands to know why she shouldn't kill him for trying to kill her. His answer does not satisfy, so she punts his head off of his shoulders with the hammer.

Finally, as night falls, Harley arrives on Coney Island and locates her building. It happens to be the home of a Freakshow, a wax museum and other interesting businesses. One of the first people she meets is a tenant named Big Tony, who recognizes her from the description given by Mr. Coachman. He, meanwhile, has been waiting all day for her to arrive, and explains that while the first floor is commercial, the second has eight apartments (mostly occupied by people who work on the first floor), and she will be responsible for collecting their tenants' rent. The third floor is mostly storage and lumber, while the fourth floor is massive, and it's all Harley's. It has a private express elevator and roof access. Unfortunately, it all comes with a catch: she must take on the back-taxes, real estate taxes, insurance and upkeep costs. Though she hasn't got a dime, Harley insists she will be able to handle it.

The next morning, while moping about the strings attached to her good fortune, Big Tony shows up to announce that he and the others helped move her things into her new apartment. On top of that, they chipped in to get her breakfast and a newspaper to find help wanted ads for a job. Unseen by either of them, an assassin fails to get a clear shot on Harley as she keeps moving around excitedly.

After securing two job interviews, Harley applies makeup to hide her bleached skin. Her first interview is at the Free Spirit Assisted Living Home, where her resume as a therapist impresses. The home has a special division just for those patients who are a danger to themselves, and Harley's interest in that aspect of the job is piqued.

The second interview is for a job that satisfies Harley's other qualifications: a roller derby league. She is welcomed to the rink by a girl named Summer who encourages her to get physical, as there is only one slot open on the team. For the tryout, Summer explains the basic rules, but adds that the last skater standing will be the one who makes the team. Though many of Harley's moves are restricted, Summer allows them, because they are a league that bends the rules for entertainment's sake, and the referees play into that. Naturally, Harley's penchant for brutal violence leaves her the winner, and Summer hires her on the spot. Any win for the team, and she will get a percentage of the door charge, while losing gains her some drinks and free medical supplies.

Later that night, Harley enjoys some relaxing time moon-bathing on the roof. If she gets the therapist job, she will be able to cover all of her costs, so long as everyone pays their rent. Sighing, she revels in the security of having her own home, unaware of the assassin sneaking up behind her. Before she can fall victim to the killer's sword, two gunshots ring out, and Harley discovers that Big Tony has saved her life. Searching the body, Harley discovers that there's a hit out on her for two million dollars. Grimly, Tony welcomes her to the neighbourhood.

Retrieved from "https://heykidscomics.fandom.com/wiki/Harley_Quinn_Vol_2_1?oldid=1431256"
Community content is available under CC-BY-SA unless otherwise noted.