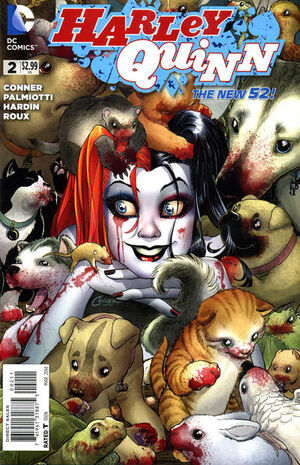 Hmm... This place could use some greenery.

Having recently gained ownership of a building in Coney Island, Harley Quinn is only slightly embarrassed to be caught assaulting a wax figure of the Joker in Madame Macabre's wax museum below her loft. The museum depicts some of the world's most famous killers for viewers to ooh and aah at. With that in mind, Harley reminds Madame Macabre that as the new owner, she will be collecting rent on the first of the month. In the meantime, though, she needs a refrigerator for her loft, and hopes Madame Macabre can help her find one. Macabre suggests she pick one up from the Kingsborough Morgue.

With her cold storage issues taken care of, Harley happens upon a protest outside the King Hill Pet Adoption Center, and investigates. She learns that the shelter euthanizes its animals instead of allowing adoptions. As it turns out, the protesters have adopted so many pets to save them from euthanization that bylaws preclude them having anymore. Hoping to save some lives, Harley decides to do some adopting. After all, she only has one pet. Unfortunately, upon Harley's filling out the eligibility form, the manager takes one look at it and tears it in half. Unfortunately, she will have to use unofficial means to rescue the animals.

So, Harley makes a call to Poison Ivy in Gotham City, and Pam is only too happy to come for a visit and a girls' night out. While she waits, Harley enjoys a sandwich - a difficult task, given how hard it is to enjoy anything with the corpse of one of a number of assassins stinking up her loft. She had hoped to get the fridge delivered that night in order to reduce that stench a bit, but she is disappointed to learn that the delivery will be delayed. Grumpily, she wonders what to do about the body, only to be terrified when it stands up and suggests she give it a bath. Fortunately, it is only a prank played by Poison Ivy, who was acting the puppeteer with her vines.

After a brief tour, and an introduction to her beaver, Harley and Ivy work out their plan to liberate the animals together. That plan goes awry when, once freed, all of the animals simply run out into the streets. Worriedly, the pair split up to gather the ones they can.

Unfortunately for Harley, the bounty on her head remains intact, and while separated from Ivy, a bounty hunter speeds toward her in his car, hoping to run her down. After forcing him to drive his car into a pole, she demands to know whether or not he was hired, and is upset to learn that the client posted her address on the internet. Hoping to set an example, she throws him violently through the window f a butcher shop. As an added bonus, though, the smell of blood and meat draws the attention of all the escaped dogs she was searching for.

Strapping the mook to his trailer hitch, Harley steals his car and leads the dogs back to her place, where Ivy is waiting. Ivy already knows about the hit on Harley, and suggests that they fake her death and let her collect on the bounty. In the meantime, though, Ivy user her plants to lure the cats and birds back - and now they're all waiting in the loft, eager to tear Bernie the Beaver to pieces. Ivy is unconcerned, but for Bernie's sake, they toss the animals the would-be assassin instead.

The next morning, Ivy wakes up before Harley and makes her way downstairs, thinking that the place could use some greenery. Harley wakes to find Ivy gone, and prepares to feed her new pets, only to discover that Ivy has turned the empty floor of her building into a dog park. She is greeted there by Big Tony, who hopes to let his friend Rodney - a dog-man from the freakshow - play in the park too. After Harley agrees, he comments that she will have to come up with a resolution for the poo problem. She suggests that if he can build her something, she has plans for a solution.

From across the street, a certain someone watches her, promising that they will use her to see his enemies dead.

Retrieved from "https://heykidscomics.fandom.com/wiki/Harley_Quinn_Vol_2_2?oldid=1431257"
Community content is available under CC-BY-SA unless otherwise noted.