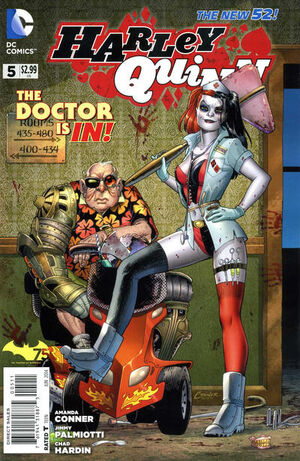 Appearing in "The Hunt for Red Octogenarians"Edit

Synopsis for "The Hunt for Red Octogenarians"Edit

Over far too many chili dogs, Harley Quinn has a look at Sy Borgman's file, detailing the mission he gave up - to kill the Russian agents who blew him up, and made him the cyborg that he is. She is eager to get started with the killing and maiming, but he insists that she spend the night studying up. These men may be old, but they are treacherous individuals. In exchange for her help on this, he promises to help her with her problem: the bounty on her head.

Upon her return home, Harley spots her friend and tenant Big Tony taking tickets for a burlesque show outside. He offers to let her see it for free, and gleefully, she rushes inside, stuffing Sy's file into his arms and asking him to hold it for her. At the show, though, she causes a scene when she mistakes an act with knives for a legitimate threat, and tackles one of the dancers, prompting the audience to pelt everyone on stage with tomatoes. Afterwards, Tony grumpily gives her the file back, and sends her on her way.

That night, as she studies the Russian agents' photos, Harley falls asleep and has a bizarre dream, culminating with the sudden waking realization that the chili dogs she ate earlier are about to bestow upon her an unpleasant bathroom experience.

The next morning, after her regular appointment with Ida Rubenstein, Dr. Quinzel yanks off her lab coat and meets Sy up on the roof. She points out that despite his saying there were eight targets, he only gave her seven files. Sy snaps that they won't be talking about the eighth man right now, commenting that he is the most devious of them all. In the meantime, though, their first target lies just across the way in a neighbouring hospital - convalescing. Igor Lenivetskin is in a coma - the best cover possible - though he once enjoyed torturing people to death. Rappelling across the gap, Sy and Harley ride his scooter through the window of Lenivetskin's room. After struggling to find an effective way of killing the man, Harley takes one of the tubes Sy severed in a desperate attempt to speed his enemy's demise, and blows into it with such force that the arteries in Lenivetskin's head explode.

Their next target is in Mills Basin, Brooklyn; Ivana Brekemoff. Sy explains that the she will be more difficult than the last target, and insists that he do the talking with her guards outsider he mansion. Unfortunately, Harley's penchant for ad-libbing botches that plan, and they are forced to enter via violence. Before she goes out to face Harley and Sy, Ivana calls back to one of her allies to warn of their intent. Soon, Harley and Sy find themselves needing to duck suddenly, as Ivana fires an RPG at them. Fortunately, Harley's hammer Beatrice is effective in knocking the weapon from the older woman's hands, and she grabs Ivana in a headlck. However, Ivana is crazier than she looks, and she detonates explosives that blow up her entire household with she, Harley, and Sy still inside.

Retrieved from "https://heykidscomics.fandom.com/wiki/Harley_Quinn_Vol_2_5?oldid=1431260"
Community content is available under CC-BY-SA unless otherwise noted.