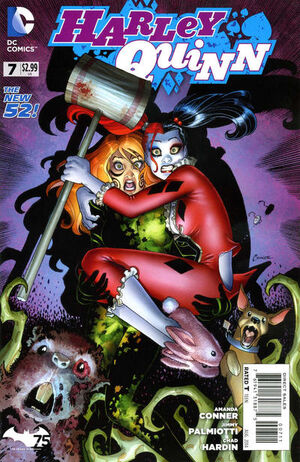 Hey, shishka-bimbo... You try an' turn my friend into cole slaw... and I'm gonna go all hibachi steakhouse on your ass!

While relaxing together on the beach on Coney Island, Poison Ivy explains to Harley Quinn that the posting placing a bounty on her head is coming from Harley's own laptop. Someone must be breaking into Harley's penthouse while she sleeps, and updating the posts. Their conversation is interrupted when two burly men in speedos attempt to chat them up. Though neither is particularly interested, the girls agree to mess with them.

After hours of taking advantage of the hunks' enthusiasm for foot-rubs, Ivy decides it might be time to get to work, much as Harley is attached to her foot-rubber. Finally, she agrees to return home, and the three of them (Ivy's suitor suffered an unfortunate fate in the interim) arrive in time to see Big Tony making a deal with Madame Macabre to sell the corpses of the assassins Harley and Ivy killed to the wax museum.

Later that night, Ivy determines that the website had been updating every five days - which conveniently means that the next update will occur that night. She discovers a deeply hidden folder on the laptop which is password protected, and Harley doesn't know where it came from - nor can they guess the username and password.

In the meantime, Ivy takes great pains to get Harley to sleep, so that she can wait for the sneak to break in, and jump them. When finally Harley drifts off, Ivy is surprised to see her friend begin sleepwalking. Within a short time, Harley is on her laptop, raising the bounty on her own head. Ivy hopes she can watch Harley access the encrypted folder, but suddenly a pair of assassins crash through the kitchen window, requiring Ivy to save her life - though she may not survive long either. Fortunately, a stray boot wakes Harley up in time to come to Ivy's aid. Gleefully, she grabs a set of kitchen knives, and cuts the assassins to ribbons.

Afterwards, Ivy explains that the assassination attempts were all Harley's own doing, but with the laptop destroyed, there's nothing they can really do to stop more assassins from coming for her. Harley claims she can deal with it, but Ivy suggests that she turn the tables, and hunt the assassins instead. Having heard the ruckus - but altogether too late - Big Tony rushes up to Harley's penthouse with a shotgun in hand. Though he can't help fight assassins off, he can help dispose of the bodies. As he begins bagging one of them, the assassin's phone begins ringing, and instinctively, Harley grabs the gun and blasts the corpse with it. Fortunately, the phone survived the blast, and Ivy collects it, noting that a meeting of the Brooklyn Assassins Guild is set for the next day.

Together, Ivy, Harley, and Tony wait outside the location of the meet, noting with worry that there are twenty assassins inside. Ivy has an idea to fight a number that big. She communes with a nearby tree, and its ancient roots stretch far enough that they can tear up through the building's floor, and tangle the assassins up. Restraining her urge to kill, Harley rushes in among them to announce that the bounty was a ruse, and that nobody who kills her will get paid. They will be free to go, but if they try to come for her, she will already have their information (which she collects from their wallets), and will come after them and their families.

One of the assassins refuses her offer, claiming that he has no family to worry about. Tony admits that there is no way to prove that there is no bounty, but he can solve the issue easily. He pulls out a handgun, and shoots the assassin in the face. That example encourages the others to fall in line. Even so, Harley may be dealing with her assassin problem for quite some time. For the moment, though, she intends to use the money from the assassins' wallets to buy some new shoes.

Retrieved from "https://heykidscomics.fandom.com/wiki/Harley_Quinn_Vol_2_7?oldid=1431262"
Community content is available under CC-BY-SA unless otherwise noted.