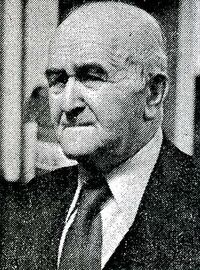 Personal History of Harry "A" Chesler is unknown.

Harry Chesler (January 12, 1898 - December 1981),[1] often credited as Harry "A" Chesler, with the "A" an affectation rather than a true initial, was the entrepreneur behind the first comic book "packager" of the late-1930s to 1940s Golden Age of comic books, supplying comics features and complete comic books to publishers testing the waters of the emerging medium.

Chesler's studio, which began in either 1935 or 1936, provided early work to artists and writers including Jack Cole, Jack Binder, Otto Binder, Charles Biro, Mort Meskin, and many others.

Most often credited as Harry "A" Chesler — the "A" was an affectation rather than a true initial, and Chesler sometimes quipped it stood for "anything"[2] — Chesler was born in Jersey City, New Jersey, grew up in East Orange,[3] and worked in the furniture business before he went into comics.[4] He also worked for a time at the Philadelphia Public Ledger, where he picked up his fictitious middle initial.[3] In the 1920s, Chesler worked in advertising.[3]

In 1935[5][6] or 1936,[5][7] Chesler established a studio in Manhattan to supply comic-book content to publishers testing the waters of the emerging medium. The "Chesler shop" or "Chesler Shop", as it was informally called,[6] was the first such "packager",[7] later to be followed by companies including Eisner & Iger and Funnies Inc. Chesler in 1976 recalled it was located first at Fifth Avenue and 32nd Street, and later at Seventh Avenue and 23rd Street.[3] George Tuska, a comic-book artist who had worked for Chesler in the late 1930s, recalled, "Chelser had his office on the fourth floor of a building on 23rd Street between Sixth and Seventh Avenue[s]".[4] (One source lists the studio at 28th Street and Fifth Avenue.)[5] During this time, Chesler commuted from his home in Dover, New Jersey.[3]

Chesler's early publications Star Comics and Star Ranger were produced through his own Chesler Publications, Inc.[8] These were bought by Ultem Publications in 1937, where he continued as editor until Ultem was in turn bought by Centaur Publications in 1938.[9] By the late 1930s, Chesler's packaging business was flourishing. As Tuska recalled, Chesler "did alright with comics. Bought a lot of property in Jersey. Made his own lake".[10] Circa 1939 to 1940, Chesler was living in the Succasunna section of Roxbury Township, New Jersey;[10] he lived there again later in life.[3]

Chesler employees remembered him as a tough but warm boss who always wore a hat and smoked a big cigar.[3] Artist Joe Kubert recalled Chesler paying him $5 a week, at age 12 (c. 1938) to apprentice at his studio after school.[3] Similarly, artist Carmine Infantino remembers that, c. 1940, he was paid by Chesler "a dollar a day, just [to] study art, learn, and grow. That was damn nice of him, I thought. He did that for me for a whole summer" while Infantino was in high school.[11]

Chesler's later imprints included Dynamic Publications,[12] Harry "A" Chesler Jr. Publications,[13] and Harry "A." Chesler Feature Jr. Syndicate.[14] The covers of many of his 1940s comics bear the phrase "Harry 'A' Chesler Jr. Features Syndicate, N.Y.".[15] or "Harry 'A' Chesler, Jr. World's Greatest Comics".[16] Comic-book historians sometimes label all such imprints informally "Harry A Chesler Comics." In his heyday, Chesler recalled in a 1976 profile, "besides about 75 of my own titles, we produced comics for some 50 different publishers. At one time, there were 40 artists working for me and I had 300 comic titles on the newsstands."[3] However, the Grand Comics Database records only 19 distinct titles directly published by Chesler between 1937 and 1946,[17] leaving the meaning of "my own titles" in this quote unclear.

Chesler's comics enterprise was severely affected by World War II. Chesler's main pre-war editor, Phil Sturm, was on active duty for most of the war, severely curtailing the company's ability to produce comics. Chesler's son, Harry A. Chesler, Jr., although listed in the business records as a co-owner in name, was never involved in the publishing business.[17] Evidence from Chesler publications' statements of ownership during the war indicate that Chesler, Jr. was "on leave to the US Army."[24]

Chesler was briefly a partner with Archer St. John in St. John Publications in 1953.[5]

The studio was active through 1940, after which it reorganized and ran through at least 1953,[5] though a former Marvel Comics editor-in-chief said in 1981 that from c. 1971–1975, the Chesler studio produced material for the Marvel Comics line of black-and-white magazines.[25]

In 1976 Chesler donated over 4,000 pieces of original comic book and comic strip art, much of it dating from the turn of the 20th century, to Fairleigh Dickinson University's Friendship Library.[3] He died in December 1981, still living in Succasunna.[1]