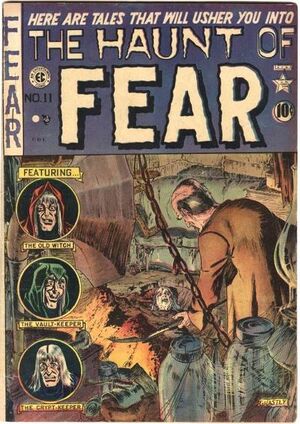 Appearing in "Ooze in the Cellar?"Edit

Synopsis for "Ooze in the Cellar?"Edit

A miser creates a blob-like creature in his cellar by mixing in the remains of his wife with those of a mouse, a cat, and mounds of refuse.

Appearing in "The Acid Test!"Edit

Synopsis for "The Acid Test!"Edit

1 of 4
Add photo
A woman grows to hate her doting husband so much that she throws a bottle of acid into his face, blinding and disfiguring him. During her trial, he professes to still love her and makes excuses for her action. Her lawyer advises her to play along, and she acts convincingly, so the jury lets her off. Unfortunately for her, her husband was only acting on the witness stand as well, in order to prevent her being sent to prison, so he could pour a bottle of acid into her face.

An exterminator has a dream after coming home from a job that he spots a cockroach on his floor. He gets up and strides over to it, bringing his shoe heel down upon the bug, whereupon it emits an ear-piercing shriek. This acts as a signal for all the bugs and rats the exterminator has ever killed to come pouring out of the walls and overwhelm him. Just as he is about to expire, he wakes up and sees a cockroach on the floor. Feeling annoyed at himself for having such an absurd dream, he crosses the floor and brings his shoe down upon it, whereupon the roach...screams.

Two business partners who own a fertilizer factory next to a cemetery decide to tunnel under ground into the caskets in order to fill a large order for bone meal fertilizer. After they succeed in filling the order, they decide to take a vacation upstate, but the car conks out beside a farm's corn patch. They move through the corn patch, which happens to have been fertilized by the order they filled, towards the farmhouse but do not make it as the corn husks become animated and beat them to death.

CK's story is the first story he interrupts repeatedly.

Retrieved from "https://heykidscomics.fandom.com/wiki/Haunt_of_Fear_Vol_1_11?oldid=108184"
Community content is available under CC-BY-SA unless otherwise noted.