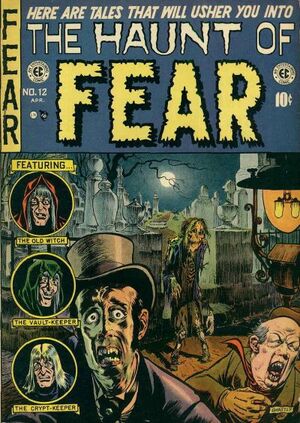 1 of 8
Add photo
A wealthy man and his son want the property of the well-liked elderly town garbageman and so they instigate a smear campaign to drive him out. First they get a license ordinance passed, and since he can't afford to pay it, the stray dogs and cats he's picked up are carted off to the pound. Then they get the neighborhood's children to stop visiting the old man. St. Valentine's day arrives and the old man is at first delighted to find his mailbox stuffed with cards thinking that the children have not forgotten him after all. Then, sobbing, he reads the poisoned missives one after the other that the wealthy man and his son have distributed amongst the townsfolk. No one sees him for a week so they check his house and find that he has hanged himself. On the following St. Valentine's day his corpse rises from the grave and tears the heart from the son's chest and leaves it as a valentine for the father.

Appearing in "On A Dead Man's Chest!"Edit

Synopsis for "On A Dead Man's Chest!"Edit

1 of 3
Add photo
A man's younger brother begins an affair with his wife. After the three of them go out for a night on the town, the elder brother gets a tattoo on his chest of himself, his brother, and his wife arm-in-arm. The younger brother and the married woman hatch a plot to murder the husband where it will look like an accidental slip and fall in the bathroom. The younger brother pins his brother's arms and the wife clouts him in the head with a club. After he's dead, she glances at his chest and screams in horror. She pulls a gun and shoots dead the younger brother. When the police respond to the shot, they find her madly scrubbing her dead husband's chest, unsuccessfully attempting to remove the tattoo depicting the man with his arms pinned by his brother while his wife raises the club over his head.

Appearing in "Till Death Do We Part!"Edit

Synopsis for "Till Death Do We Part!"Edit

The Sixth Sense with a burglar instead of a psychologist.

Two restaurant owners take on a third partner with ideas to make their roadside diner a success. He convinces them to specialize in chicken and adds broiling and deep fried to their eatery renamed the 'Chicken Coop'. The owners get greedy and decide to murder the newcomer in order not to have to split the profits with him. They tie him up and set his house on fire, he escapes, but is severely burned and makes his way back to his former business partners where he broils one and deep fries the other.

Retrieved from "https://heykidscomics.fandom.com/wiki/Haunt_of_Fear_Vol_1_12?oldid=108185"
Community content is available under CC-BY-SA unless otherwise noted.