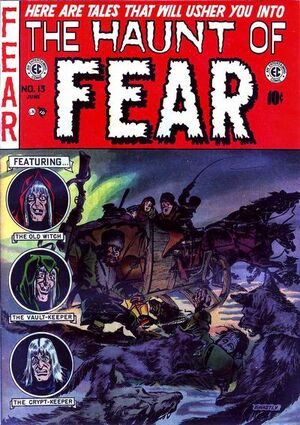 Appearing in "For the Love of Death!"Edit

Synopsis for "For the Love of Death!"Edit

A man envious of the accolades showered upon the dead at their funerals resolves to slay the town's richest man so he can substitute for the corpse and enjoy the pomp and circumstance. He uses a knife to disfigure the victim so that a closed casket request will be made and then he takes his place in the coffin. Unfortunately for him, the deceased's final instructions entailed cremation.

1 of 4
Add photo
A sword-swallower marries a man who becomes obese over time by spending all the money she earns with her act on food. She gets revenge by encouraging him to learn the act and when he's got the blade down his throat, she binds his hands in the dressing room and leaves him to the inevitable gas his gluttony has made him liable to.

The neighborhood boys are curious that the new kid on the block never comes out to play. Ezra's uncle leaves the house every night with a carton under his arm, and when the kids read in the paper of some vampire killings, they assume the man is the vampire so they follow him one night and observe him kill someone and drain their blood into the jug he keeps in the carton. Now that they know he is the vampire they figure he doesn't let Ezra come out for fear of speaking to the authorities. The children resolve to stake the vampire through the heart the next day, which they do, only to discover Ezra sleeping peacefully in a coffin in the cellar with the drained jar of blood next to him.

Travelers in a sleigh just a few scant miles outside a town on the Russian steppes find themselves beset by a pack of wolves. The officer in the sleigh has a rifle with two bullets left that kills two wolves buying them some time to get closer to the town as the pack pauses in their pursuit to devour the fresh kills. An old man was bringing a package of meat to some relatives that he tosses to the pack when they are just a few miles short of the town. The driver realizes they aren't going to make it, and proposes that one of them, the officer, a woman and her new baby, or the old man sacrifice themselves in order to save the others. One of them is hurled into the pack of slavering beasts but the story leaves it up to the reader to decide who.

Retrieved from "https://heykidscomics.fandom.com/wiki/Haunt_of_Fear_Vol_1_13?oldid=108186"
Community content is available under CC-BY-SA unless otherwise noted.