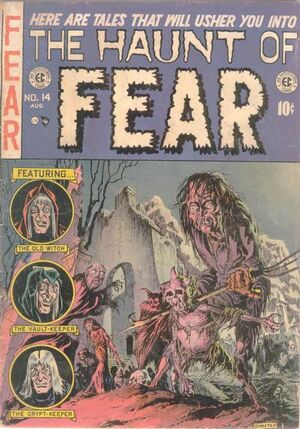 Appearing in "A Little Stranger!"Edit

Synopsis for "A Little Stranger!"Edit

A man finds himself scratched by wolfsbane and transforms into a werewolf on every full moon. After his third kill, he hears someone approaching, and hides in the brush. The lovely young woman shows no fear as she approaches the still-warm corpse and bends to pierce its neck with her vampire fangs. The werewolf challenges her "It's mine!" and she responds "You abandoned it!" "Wait! There's no need to fight. There's enough here for both of us." She is very beautiful and the werewolf falls in love with her. They take to hunting the hill country together, seeing each other only once a month as the moon affects his transformation. She hopes one day they will find someone who can marry them. He protects her coffin during the day by moving it from place to place, but one day, the villagers catch up to them. They put a silver bullet in his heart and a stake through her's and bury them in the devil's graveyard, a place for murderers and such like. That night, the graves erupt as there is excitement among the undead. "There's going to be a marriage!" they exclaim. The vampire and werewolf are married, with a mausoleum as their honeymoon suite. The following morning the graves are filled back in and all is still, until about nine months later one evening the graves burst open once again, as an excited thrall mutters among themselves "She's expecting!" and they all gather to watch the delivery of...the Old Witch.

Appearing in "Take Your Pick!"Edit

Synopsis for "Take Your Pick!"Edit

1 of 4
Add photo
A woman with a miser for a husband loses her marbles after enduring countless acts of 'ice-heartedness' and takes an ice-pick to his chest.

Four occupants of a small plane find they need to ditch in the ocean. They inflate a life raft and come upon a derelict drifting at sea. The ship is completely covered with a strange fungus and one of them makes the mistake of trying to sample it with a pocket knife. Upon tearing the membrane a digestive-like fluid spills over him, dissolving him alive. Two of them make it back to the life raft, and are spotted by a search plane, unfortunately the raft is now infected with the fungus as it was moored to the derelict.

Appearing in "This Little Piggy"Edit

Synopsis for "This Little Piggy"Edit

A British officer visits his uncle in India during the occupation. His uncle warns him off hunting the wild boars in the area which are sacred to the natives. He disregards him and kills a boar, then prepares it by boiling the hair off, roasting it upon a spit, and finally serving it on a plate with an apple in its mouth. A native servant present during the dinner witnesses this and is horrified. The uncle apologizes to the native head, but word gets out, and though the officer is to leave the area tomorrow, the natives get hold of him and give him the same treatment.

Retrieved from "https://heykidscomics.fandom.com/wiki/Haunt_of_Fear_Vol_1_14?oldid=108187"
Community content is available under CC-BY-SA unless otherwise noted.