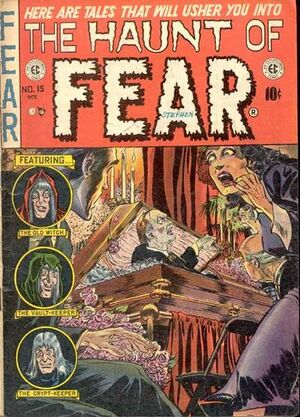 1 of 8
Add photo
A man subject to cataleptic fits worries that he may be buried alive during one of them so he instructs his undertaker to perform no embalming and has a telephone installed in the coffin. He gets into an auto accident while having a fit and it is mistakenly assumed the car crash killed him and so he is buried. When he revives in the rapidly oxygen-depleting coffin, he first tries to phone his wife, but she is always chatting with friends. Then he tries to phone his brother, but he is never home. Then he tries to phone his doctor, but he is always on the line with other patients. Finally, he tries to dial the operator, but unfortunately for him, it is Dec 7th 1941 and all circuits are busy...

Appearing in "All Washed Up!"Edit

Synopsis for "All Washed Up!"Edit

A man doesn't have the money to marry his girl, so he kills his wealthier rival and dumps his body down an old well. While he is doing so, he accidentally drops the diamond ring he stole from the victim down the well. He returns for the ring only to have the corpse clamp its teeth into his ankle when he attempts to climb back up out of the well and drag him back down under the surface.

Appearing in "Death of Some Salesman!"Edit

Synopsis for "Death of Some Salesman!"Edit

A salesman has the bad luck to break down outside the home of a deranged old couple who cover him with a shotgun as they show him their refrigerator, stove, vacuum cleaner, grandfather clock, and television set that they made sure worked by testing it out on the body of each device's respective salesman. The man asks him "What do you sell?" and he replies "It's out in the car" while the old woman covers him with the shotgun. The old man goes to get it and he tells the woman "You don't want what I sell" and offers to pay anything to be released but she just waits for her husband to return with the device, a handy-dandy meat cutter...

Retrieved from "https://heykidscomics.fandom.com/wiki/Haunt_of_Fear_Vol_1_15?oldid=108188"
Community content is available under CC-BY-SA unless otherwise noted.