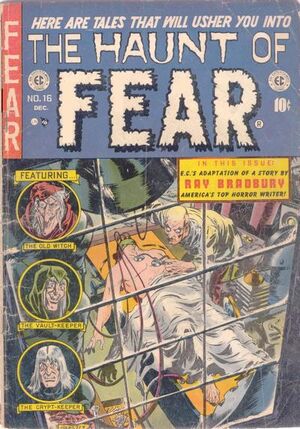 A man blackmails a doctor into transplanting his head onto another's body, at first to avoid deformity and eventually to achieve immortality. By the time of the fourth operation the doctor is old enough not to be concerned about the possibility of blackmail, and wracked by guilt of the three killings over the years, leaves the separated head to die on the surgical table.

Appearing in "A Creep in the Deep!"Edit

Synopsis for "A Creep in the Deep!"Edit

1 of 4
Add photo
A man's wife is a attacked by a vampire while she is out in a rowboat in the middle of a lake and he is spear fishing. When he later returns to the lake, he hears of strange killings where the victims have been drained of blood and realizes that his wife must have been turned into one of the undead and now resides in the lake. He sharpens his spear and returns to the lake to stake her through the heart and bring her peace.

The chef of an obese king finally gets fed up with him and converts him into sausages.

A man builds an automatic coffin to lower the cost of funerals. The coffin plays music, reads a service, and unfortunately for his sponging kid brother who lies down in it, drains the corpse's blood, injects formaldehyde, and buries itself with shovel attachments on its side.

Retrieved from "https://heykidscomics.fandom.com/wiki/Haunt_of_Fear_Vol_1_16?oldid=108189"
Community content is available under CC-BY-SA unless otherwise noted.