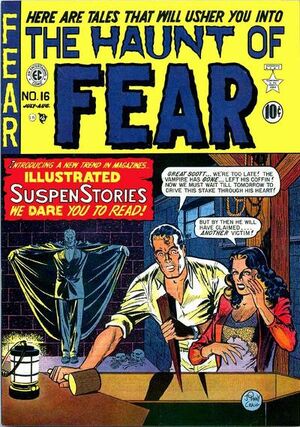 1 of 4
Add photo
Dr. Reed is called in to diagnose a young woman and mistakenly assumes that her father is a vampire draining her blood when in fact she is the vampire.

A man makes a deal with an African tribe to provide the head of a partner who attempted to steal their shrunken heads.

Appearing in "The Killer in the Coffin!"Edit

Synopsis for "The Killer in the Coffin!"Edit

A man fakes his death from the plague in order to have a perfect alibi for murdering his wife but doesn't count on his lover contracting the plague and being unable to unearth his coffin.

Appearing in "The Mummy's Return!"Edit

Synopsis for "The Mummy's Return!"Edit

A prayer to return the dead is read in the mummy's tomb and he kills a jealous explorer before he can take the life of a beautiful woman.

Retrieved from "https://heykidscomics.fandom.com/wiki/Haunt_of_Fear_Vol_1_16(2)?oldid=108206"
Community content is available under CC-BY-SA unless otherwise noted.