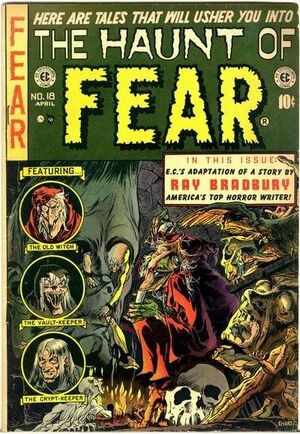 A young woman marries an old man with a penchant for tobacco and poetry for his money and quickly grows tired of him. She meets a young man and they plot to push him down the stairs as though his death were accidental. After he dies, she buys a monkey as a pet that was born the same day her husband was killed. She tells her lover that they must wait a year before they marry to make it look good, but he feels that she is putting him off. One night, when he visits, he finds little clues that she has been entertaining a gentleman guest. He loses his temper and kills her as the police arrive after receiving a phone call with an animal-like shriek. After he is taken away, the monkey comes back to the chair and finishes his pipe and poetry reading.

1 of 4
Add photo
A woman buys a stretch rack for her husband when he reveals that he killed her wealthy father so as to appear an accident and married her for her money and not for love.

This grim fairy tale relates the story of a prince who gets the king to pay him a yearly allowance of what he weighs in gold. In order to be as heavy as can be, he swallows lead shot to get his already fat frame close to almost 500 pounds. As he urges the carriage faster and faster to arrive at his new castle, the brakes are thrown suddenly and the shot explodes out of him.

Appearing in "The Black Ferris!"Edit

Synopsis for "The Black Ferris!"Edit

Two boys witness a Ferris wheel at a creepy carnival that can make time go forwards or backwards for the rider depending on which way the wheel spins. A man tries to take advantage of this by riding the wheel backwards 24 times until he is a 10 year boy and then posing as an orphan in order to find and steal a kindly old woman's money who has taken him in. He plans to then ride the wheel forwards 24 times so no one will ever find the culprit. The boys warn the woman about him and tell their parents, but of course no one believes them. They are afraid the man will attempt to kill them, so they intercept him the next time he is riding the Ferris wheel and attack the operator. The wheel becomes stuck in the forward position, and when it finally does come to a halt, the gathered crowd stares in shock at the skeleton reclining against the seat.

Retrieved from "https://heykidscomics.fandom.com/wiki/Haunt_of_Fear_Vol_1_18?oldid=108191"
Community content is available under CC-BY-SA unless otherwise noted.