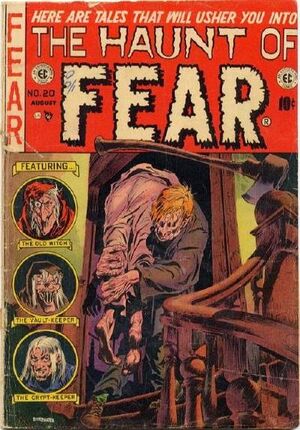 A murderer thinks he is like the character in Poe's Tell-Tale Heart, imagining he hears a heartbeat in the walls, but after police examine the area they find his older brother's corpse. When the youngest brother admits to slaying the eldest brother for the family inheritance and burying the body in the cellar, the police dig it up, and it is revealed to be missing its heart.

1 of 3
Add photo
Gloria was in a cab, running away from her husband Ralph...heading toward the train station and the train that would take her away from this man whom she thought was trying to poison her. Seated on the train, she kept imagining him at every turn and remembering the $25,000 insurance policies Ralph had taken out on them both...then she remembered that poison bottle he had brought home. Asleep in her berth, Gloria suddenly awakens at what she thinks is a scream, and goes to wake the conductor...but he is dead in his berth. In fact, everyone is dead in their berths! She jumps off the train and locates a farmhouse that has a freshly-dug grave outside. She enters the house and spies a coffin in it....then sees Ralph behind her, who grabs Gloria, puts her in the coffin, nails it shut, drags it to the grave and buries it. Suddenly, she awakens in her berth on the train.....sees Ralph with an attendant in a white coat, who takes her off to a nice house with bars on it so that Ralph can never get to her again!

A man marries a woman the townsfolk warn him away from because, after her previous five husbands sicken and die, they think she is a vampire. It turns out her child has a rare blood disorder and she has been performing transfusions upon the men as they slept at night. The man knows she isn't a vampire because he is in fact one, and he drains both her and the child's blood.

Appearing in "Hyde and Go Shriek!"Edit

Synopsis for "Hyde and Go Shriek!"Edit

A chemist strings along a rich admirer of Dr. Jekyll and Mr. Hyde who is willing to pay to have such a personality altering formula recreated. The joke is on the chemist when he ingests the formula he comes up, thinking that it's a placebo, but it actually does work and he loses control of himself and murders his girlfriend.

Retrieved from "https://heykidscomics.fandom.com/wiki/Haunt_of_Fear_Vol_1_20?oldid=108193"
Community content is available under CC-BY-SA unless otherwise noted.