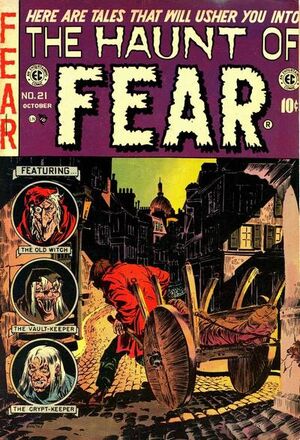 Appearing in "An Off-Color Heir"Edit

Synopsis for "An Off-Color Heir"Edit

A modern telling of Bluebeard.

A doctor transplants a cat's nine lives gland into a derelict in order to make money in death-defying stunts. The derelict betrays the doctor in order to keep more of the money, but the doctor has the last laugh by realizing the derelict is miscounting the lives he has left to lose since the dead cat had already used one making eight, not nine left.

A woman with suicidal tendencies and the skeptical psychologist who loves her visit a swami who diagnoses her problem as stemming from her having witnessed the hanging of an obese man whose popped right off the body releasing a 'decapitation Lamia' that has possessed her and, sadly, can only be removed by decapitation. She flees from the swami in terror, rushing down into the subway, where she finds herself thrown under the train wheels and the pursuing psychologist bursts into maniacal laughter as the Lamia possesses him.

Appearing in "The High Cost of Dying!"Edit

Synopsis for "The High Cost of Dying!"Edit

A man in nineteenth century Paris is faced with the choice of paying a licensed undertaker money he does not have to bury his wife or turning her corpse over to medical students for dissection practice because of a new ordinance passed by the commissioner of health. He drops a body off in the evening at the medical college, and the following day uses the money he's received to buy food and clothes for his starving children and to bury his wife. The medical students realize that the body they've received is that of the commissioner of health.

Retrieved from "https://heykidscomics.fandom.com/wiki/Haunt_of_Fear_Vol_1_21?oldid=108194"
Community content is available under CC-BY-SA unless otherwise noted.