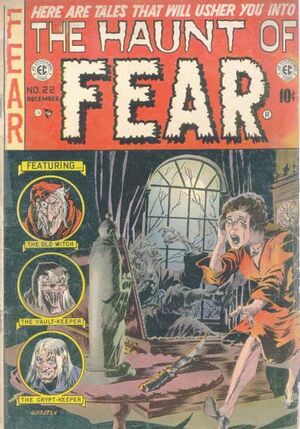 Appearing in "Wish You Were Here"Edit

Synopsis for "Wish You Were Here"Edit

1 of 8
Add photo
A couple in financial difficulty recall a time when they picked up a jade statue in Hong Kong. The wife reads the text at the base of the statue that says it grants three wishes and she wishes for money. The husband remembers a story he once read called 'The Monkey's Paw' and tells her not to wish, but it's too late. He gets a call from his lawyer advising him to drive into town, which he does, and gets into a fatal accident which mangles his body and pays off life insurance to the wife. She hasn't read the story, so she asks the man who informs her of the insurance payout about it. He tells her, whatever you do, don't wish for your husband back as he will be mangled. She says she won't make the same mistake and wishes him back before the accident. Men bring in the casket and she gets her wish, but he is still dead, as he died of a heart attack moments before the accident. The distraught wife uses her last wish to wish her husband alive but he writhes in pain because his blood has been replaced with formaldehyde. She tries shooting him a rifle but it doesn't kill him so she grabs a craving knife and shops him up into tiny little pieces, but the pieces still pulse with life.

1 of 3
Add photo
A marvel chess player in a small town shoots himself when they hold a parade and he is expected to remove his top hat to salute the flag. The top hat hides a Siamese twin head that accounted for his superior abilities at chess.

Appearing in "Snow White and the Seven Dwarfs"Edit

Synopsis for "Snow White and the Seven Dwarfs"Edit

This grim fairy tale reveals the REAL reason Snow White got the poisoned apple was that she was a neat freak who was driving the seven dwarfs nuts.

A nephew murders his uncle for his money and winds up a prisoner in one of his ship-in-a-bottles.

Retrieved from "https://heykidscomics.fandom.com/wiki/Haunt_of_Fear_Vol_1_22?oldid=108195"
Community content is available under CC-BY-SA unless otherwise noted.