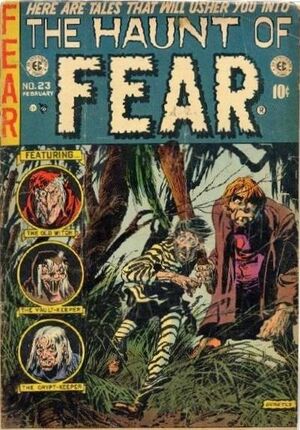 A sorority girl tries to swing her ancient civilizations course with her good looks, but unfortunately for her, the professor is really into mummification.

Appearing in "No Silver Atoll!"Edit

Synopsis for "No Silver Atoll!"Edit

A plane goes down in the ocean and the passengers make for an atoll where the captain announces they have a gun and a medical kit. People's belongings begin to go missing and they realize that what is being stolen is silver. Two people are attacked and killed and they come to believe there is a werewolf among the passengers. Although the werewolf thinks he is safe by having stolen the silver belt buckles and coins, he overlooks the silver nitrate in the medical kit hypodermic which his third attempted victim shoves into his chest.

Appearing in "Hansel and Gretel!"Edit

Synopsis for "Hansel and Gretel!"Edit

This grim fairy tale tells the REAL truth that Hansel and Gretel pushed the old woman into the roaring stove in order to steal her money.

An escaped convict beats in a woman's skull with a club in order to steal her food out in a shack set in the swamp. The convict looks up from his meal, only to see a huge hulking brute of a man looking at him. He flees in terror only to have the brute follow him clutching the club. He faces several dangers of the swamp, yet still the brute pursues with the club. Finally, he can go no further, and begs for mercy. The brute ignores his pleas and hands him back the club telling him he forgot it at his house and leaving him mentally unhinged from the stress.

Retrieved from "https://heykidscomics.fandom.com/wiki/Haunt_of_Fear_Vol_1_23?oldid=108196"
Community content is available under CC-BY-SA unless otherwise noted.