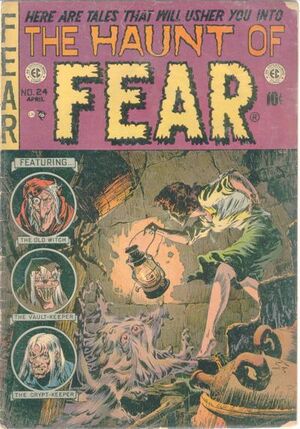 Appearing in "Drink to Me Only With Thine Eyes"Edit

Synopsis for "Drink to Me Only With Thine Eyes"Edit

A blob story that features a cuckolded moonshine-swilling mountain man as the vengeful blob creature that is created when his wife and her lover shove him into a still to drown and be dissolved with a bag of lye.

Appearing in "Only Sin Deep"Edit

Synopsis for "Only Sin Deep"Edit

1 of 4
Add photo
A heartless young woman pawns her beauty for 1000.00 to a shopkeeper she assumes is a crank. When she realizes that he has somehow caused her face to age rapidly she attempts to redeem the pawn ticket, but since he knows that she is now married to a wealthy man he demands 100000.00 for it. She knows she can't ask her husband for that much money out of the blue so she resolves to take her belongings and sell them and tell her husband they were stolen. He comes home early and assumes the old crone packing the furs is a thief so she kills him figuring there's plenty of other men to victimize. She forgets that the servants heard her voice when she entered the building and now the police are looking for her, so she can never redeem her pawn ticket if she wants to avoid being arrested for murder.

A young boy is adopted by a couple who turn out to be vampires and only want to fatten him up to drain his blood. The surprise is on them, though, as he turns out to be a werewolf and tears them to shreds.

A landlady falls for the Jekyll of a Jekyll-n-Hyde type, and when she discovers his closet of severed heads, she becomes his seventh victim.

Retrieved from "https://heykidscomics.fandom.com/wiki/Haunt_of_Fear_Vol_1_24?oldid=108197"
Community content is available under CC-BY-SA unless otherwise noted.