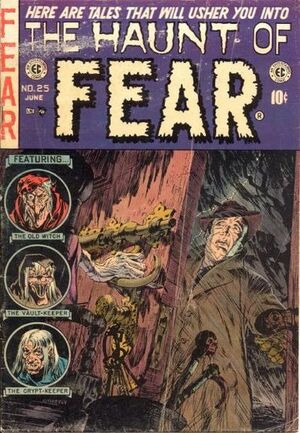 Appearing in "The New Arrival"Edit

Synopsis for "The New Arrival"Edit

This story is told by a mansion. The occupant is a lunatic old woman who lost her mind when her husband was killed in WWI and kept her new born infant uneducated and in shackles for 40 years. But this night, her 'baby' is dying, and a luckless traveler is clubbed into unconscious and when he awakens, finds that he has become the new 'baby.'

A man uses his new garbage disposal to eliminate the remains of his wife's body, but his plumber friend who installed it doesn't have experience and connects it to the water intake, so when one of the man's friends tries to get a glass of water his wife's gory remains come oozing out.

The old witch tells us a story with two endings. The first ending relates what would have happened to the protagonist if he had pursued a relationship with a new office girl who turns out to be a ghoul using human meat to feed her mother's cats, but the old witch tells us that's not what actually happened. What actually happened was he was so taken with her beauty he mistakenly tumbled out of an open window 20 stories to a very easy death while being cursed for his stupidity by the girl.

Appearing in "The Light in His Life!"Edit

Synopsis for "The Light in His Life!"Edit

A man snowbound in an Alaskan cabin makes his obese wife into candles and oil for him to read by.

Retrieved from "https://heykidscomics.fandom.com/wiki/Haunt_of_Fear_Vol_1_25?oldid=108198"
Community content is available under CC-BY-SA unless otherwise noted.