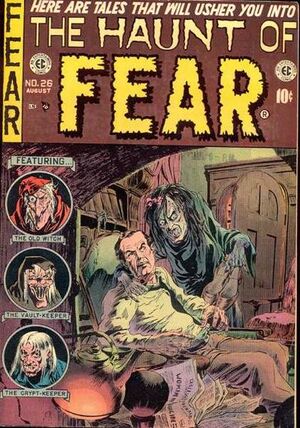 A woman who was murdered by her husband for her money comes back from the dead to fulfill her wifely role in a zombified way. He begs her to return to the grave and says he is sorry but she refuses saying "till death do us part means both of us die. Not just one." while calling him to bed.

Appearing in "The Shadow Knows"Edit

Synopsis for "The Shadow Knows"Edit

A man murders his wife making it look like a suicide in order to marry a wealthy woman. As he leaves her grave site in the evening he notices he has picked up an unwanted companion, his dead wife's shadow. At first the shadow ruins his relationship with the wealthy woman, then strangles her while framing her husband by appearing to a policeman around a corner to be a victim's shadow being strangled by the husband's shadow. The husband tells the truth on the stand but obviously the jury doesn't believe him and he is executed and buried next to his dead wife. Only then does her shadow return to the grave and rest.

Appearing in "Comes the Dawn..."Edit

Synopsis for "Comes the Dawn..."Edit

A man who has barricaded himself in an unprovisioned Arctic cabin with a vampire outside feels he's safe since he can leave once the sun comes up until he remembers that the Arctic nights can be very long...