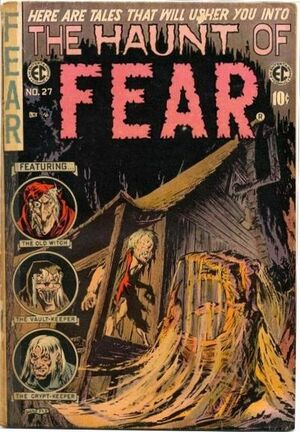 1 of 8
Add photo
A father thinks he has twins, a beautiful girl and a deformed girl. When he shoots the hateful, vindictive monstrosity to free himself and his beautiful daughter from her presence, he realizes that his wife had given birth to a Siamese infant with two heads joined at the back of the skull and hidden the secret from him.

1 of 3
Add photo
A man in a Puritan colony kills his wife and dumps her body with a weight attached into a pond in order to solicit another man's wife to run away with him. He is caught kissing her and so is sentenced to three dunkings in the pond, where on the third dunk, the dead wife loops the coil of rope over him and pulls him off the chair while he drowns.

In this grim fairy tale a remorseful king demands silence after his boisterous merry-making prevents him from hearing his daughter's shouts for help leading to her death. Eventually his demands on the peasants get so absurd he orders them to stop breathing because of the racket he claims to hear they make. They revolt, and one of them sews a sensitive metronome into the king's body that goes off with the slightest disturbance, and when the still-lying king brushes away an insect, the sound so bothers him he throws himself off a cliff.

This story is told by a shack in the swamp whose occupant is an idiot cannibal. He disposes of his victims beneath the rotting supports of the shack and eventually it collapses bringing him down into the bog to join his victims.

Retrieved from "https://heykidscomics.fandom.com/wiki/Haunt_of_Fear_Vol_1_27?oldid=108200"
Community content is available under CC-BY-SA unless otherwise noted.